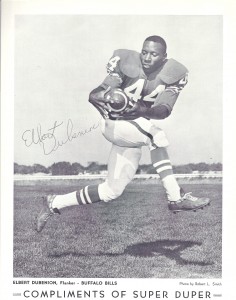 As a Chargers fan, I have rarely had the opportunity to put the words, “Super Duper,” and “Buffalo Bills,” together.  The Bills blasted my Bolts in the 1964 & 1965 championship games, though admittedly I hadn’t been born yet, so my period of mourning was not extensive.  In point of fact, I have only put those two phrases together in one particular manner, but it was for a very appropriate reason.

In the fall of  1965, the Super Duper Food Markets distributed a 10-piece collection of 8.5″ x 11″ photos featuring members of the reigning AFL Champion Buffalo Bills.  The prints, which used images taken by Bills team photographer, Robert L. Smith, were given weekly to shoppers of the Super Duper grocery chain throughout western New York.

The photos were unnumbered, and a complete set is composed of the following prints:

The photos are not terribly easy for collectors to find now, nearly 50 years after their original distribution.  Fans wanting to collect the complete set can expect to pay somewhere in the area of $250 for a set in nice condition.