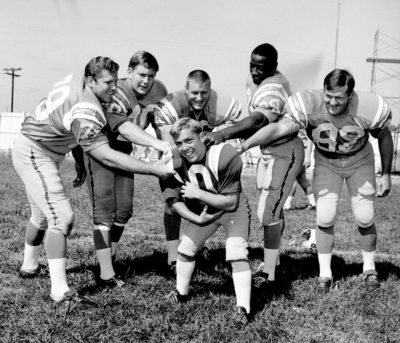 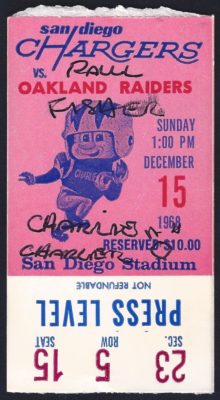 It has been a week since the Chargers announced their move to Los Angeles.  San Diego has been very anti-Chargers since, and understandably so.  But while I can easily write off the current ownership, I cannot cast away the organization in its entirety.  Nor would I want to.  The (first) Los Angeles and San Diego Chargers were the flagship organization in the early years of the American Football League, and while they won fewer games later in the decade, they were no less entertaining.  Hadl to Alworth, Hubbard and Post, hard-hitting Kenny Graham, and the acrobatics of Paul Fisher.

Wait, who?  Paul Fisher, you ask?  Ah yes.  As Clark Kent was better known as Superman, and Bruce Wayne made the streets of Gotham safe under the guise of Batman, Paul Fisher entertained crowds at football games in the late 1960s in his role as team mascot, Charlie Charger. Fisher, an accomplished high school gymnast, was on the field at Chargers home games in 1968 & 1969, turning back handsprings, catching kicks during warm-ups, and generally adding to the festivity of Chargers games in the late AFL years.

Paul Fisher had a unique background not only as a gymnast, but one who also had football experience and enjoyed the game.  As a result, he could handle football-related tasks such as long-snapping for practice kicks and fielding punts, and doing so as Charlie Charger entertained the fans.

At the age of 67, Fisher is still a fan, and has fond memories of interacting with many of the AFL Chargers, including Lance Alworth, Speedy Duncan and Dennis Partee.  I had an opportunity to sit down with Fisher recently as he reminisced about his days wearing the Bolt. 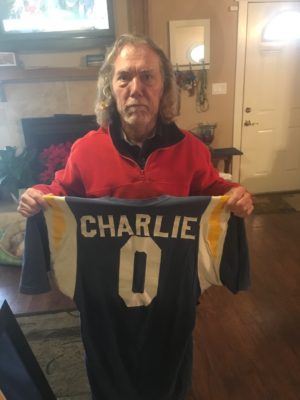