>Talking AFL at the Grocery Store

>Talking AFL at the Grocery Store 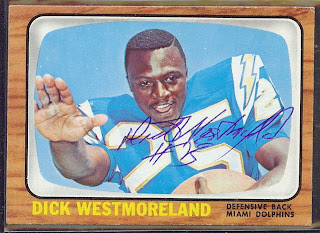 I hadn’t planned on posting today, though I am long overdue.  But when a bit of AFL runs into me while I am grocery shopping, then maybe that is a sign that I need to sit down and do some writing.  I was at my local Sprouts store this morning, when I ran into former San Diego Chargers and Miami Dolphins defensive back, Dick Westmoreland.  I’ve known Dick for many years now, and it was a nice surprise to see him.  It just so happened that I had a photo that I’ve been meaning to get to him, so I invited him to stop by my house after he was finished shopping.
Once we sat down and I handed him the photo, a great shot of the 1963 Chargers team in their team sportcoats and ties, memories began bubbling and the stories flowed. 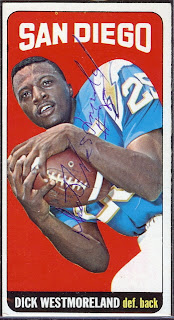 Dick Westmoreland was involved in several important AFL situations.  As a rookie with the Chargers in 1963, he earned a starting position at cornerback, and was an integral part of the Chargers lone AFL championship team.  Westmoreland finished second to Denver’s Billy Joe for AFL Rookie of the Year honors that year.
After having another successful season in 1964, Westmoreland was selected to play in the AFL All-Star Game to be held in New Orleans.  However, once the African-American players began arriving in the Crescent City, they began facing the racism that was so prevalent in the South during that time.  They were denied taxi cabs, entry to night clubs, and forced to endure ugly comments nearly everywhere they turned.  The African-American players ultimately decided to boycott the game in New Orleans.  The AFL leadership supported their decision, and the game was moved to Houston and played a week later.
After three seasons in the Chargers defensive backfield, Westmoreland became an inaugural member of the Miami Dolphins when they selected him in the 1966 AFL Expansion Draft.  He and his teammates brought professional football to Florida, and were the precursors to the great Dolphins teams of the 1970s.
Dick Westmoreland played four seasons in Miami, and led the AFL in interceptions with 10 in 1967.  He was picked up by the Minnesota Vikings in 1970, but was later released, not having actually played for them.
Westmoreland returned to San Diego after his football career ended, and began a long career with the probation department.  In fact, he made a point of telling me that today he was celebrating the two-week anniversary of his retirement.
By Todd Tobias|2011-12-09T21:18:00-08:00December 9th, 2011|AFL, American Football League, Dick Westmoreland, Miami Dolphins, San Diego Chargers|21 Comments