Talking Race and the AFL with Bobby Bell

Talking Race and the AFL with Bobby Bell

Last year I had an opportunity to do a telephone interview with Kansas City Chiefs legend and hall of fame member, Bobby Bell.  We spoke primarily about the racial injustices that he faced as a member of the Chiefs.  This article first ran shortly after, under our old hosting site.  Being that February is Black History Month, it is ready for re-posting.  We should never forget what these gentlemen, and those before, had to endure. 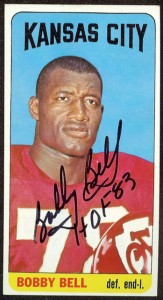 Though the American Football League is typically regarded as a league that focused on offense, there were a number of fantastic defensive players that made their names in the AFL. Willie Brown, Buck Buchanan, Ernie Ladd and Johnny Robinson are just a handful of legendary defenders from “The Other League.” Ranking somewhere near the top of the “Greatest of AFL Defenders” list is the Kansas City Chiefs linebacker, Bobby Bell. Bell was such a phenomenal athlete, that his head coach with the Chiefs, Hank Stram, once said, “Bobby Bell is the greatest outside linebacker who ever played the game… He is the only player I have seen who could play any position on a team and that team could still win.” High praise, without a doubt, but when you consider some of Bell’s accomplishments, you begin to understand just how good he was. • He was an All-State prep quarterback in North Carolina

• He earned All-America honors as a tackle at Minnesota. .

• He was selected All-AFL/AFC nine times

• He played in the last six AFL All-Star games, and the first three AFC-NFC Pro Bowls

• He was an All-AFL First Team selection

Pretty amazing statistics, and certainly the kinds of accolades that would make him a popular figure in the Chiefs hometown of Kansas City. But despite his status as a professional football player and the fact that he is a truly nice guy, Bobby Bell had a helluva time finding a place to live in Kansas City. “I couldn’t get a home loan during my first years in Kansas City because I am black,” Bell recalled when we spoke over the telephone this week. “When I got to Kansas City in 1963, I couldn’t eat in the restaurants.”

In this day and age when professional athletes are likened to minor deities, it is difficult to imagine a professional football player being denied any type of service because of the color of his skin, but racial discrimination is something that many AFL players deal with in the turbulent 1960s.

Racial injustice was not a new phenomenon to Bobby Bell. He had grown up in North Carolina, and was forced to use colored drinking fountains and restrooms in his hometown. But after leaving the South to play his collegiate football for Murray Warmath and the University of Minnesota, Bell had become accustomed to the more racially integrated North. He had great success at Minnesota, and was named as a member of the All-America team his junior year. He returned home with a celebrity status, but even then he could not enjoy the simple pleasures that were granted to his white neighbors.

“When I was selected as an All-American in my junior year, I was given the key to the city in my hometown, Shelby, North Carolina. It was at the courthouse. They had a parade, and the band from the white high school came out and played. They asked me to give a talk. But right before I began my speech, I let them know… I said, ‘before I begin, do you know what I would really like? I would love to go across the street to the ice cream parlor. I would like to walk through that front door and get myself an ice cream cone.’ The people got quiet. They looked around, and said, ‘well, he can do that, can’t he?’ They didn’t see color at that moment. They thought that I could do that. They wanted me to be a part of them then. They wanted me to be a part of Shelby, but I am black, and I couldn’t do that. I couldn’t get that ice cream cone.”

The fight for racial equality was one of the key themes of the 1960s.  Civil rights rallies were held around the country, and in their own way, many of the AFL players fought discrimination as well. Bell and his AFL All-Star teammates actually mounted one of the most unheralded, yet powerful boycotts of the time when they refused to accept the discrimination they faced while in New Orleans to play in the 1965 AFL All-Star Game.

In these days before Drew Brees and the Saints, New Orleans had been courting the AFL in the hopes of getting a professional football franchise for their city, and in doing so had agreed to host the all-star game in January, 1965. The players were encouraged to bring their families, and told that the week in The Big Easy would have a vacation-like atmosphere, with golf tournaments, great restaurants and jazz clubs. Tension soon built, however, when the black players were unable to get taxi cabs to take them from the airport to the hotels. After more than an hour spent fruitlessly trying to get taxi service, they eventually got rides into town from “colored cabs.” Things got worse from there.

“We checked into the hotel, and I’ll tell you, it was like walking on eggshells around there,” Bell recalled. “I went downstairs to eat. I got in line and the maitre de kept picking up all of the people around me… He just let me stay there. Finally a black lady came out of the kitchen and said, ‘Sir, you can order your food, but you will have to take it upstairs.’ I told her that I just wanted to eat here. I was a guest of the hotel, and I wanted to eat in the restaurant, but again she said, “Sir, you are going to have to take it upstairs.’ I went back upstairs and said, ‘I’m not playing.’”

Bobby Bell was not the only player that had felt shut out of New Orleans. Many of the black players had attempted to enjoy nice dinners and Bourbon Street’s famed jazz clubs, only to be told that they were not welcome. One group of players even had a gun pulled on them by the bouncer in a night club when they tried to walk inside. Disgusted by the treatment that they had received, the black players gathered together at the hotel and voted to boycott the game. Team owners and AFL Commissioner, Joe Foss, backed them up, and the game was moved to Houston and played the following week.

Events like these are nonexistent in today’s professional sports circles, but were part of everyday life for athletes in the 1960s. While playing exhibition games in the South, teams often had to be split up, the white players staying in one hotel, while the black players stayed in another. It is difficult to imagine, but it is a part of our history. And in that regard, it is one that should not be forgotten. I think that current NFL players would be well-served to spend some time with Bobby Bell, Earl Faison, Art Powell, or any of the hundreds of players that came before them, and learn about what these former players had to endure and how their struggles are benefiting the athletes of today. Only by understanding our past can we truly recognize how far we have come.