Team-by-Team Mt. Rushmore Awards – The Results Are In!

Home/AFL/Team-by-Team Mt. Rushmore Awards – The Results Are In!
Previous Next

Team-by-Team Mt. Rushmore Awards – The Results Are In! 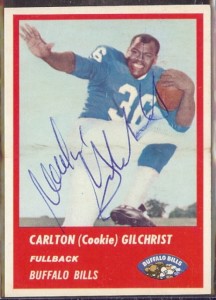 Last week we had an interesting week of discussions with our series of Mt. Rushmore articles.  Readers cast their votes for their own versions of the four most important personalities for each of the original eight AFL franchises.  Some readers included ownership and coaches in their lists, while opted for players alone.  Regardless of the type of personnel made eligible for the lists, the AFL’s greatest individuals were suggested, debated, included and cast away.  There just wasn’t enough space for the many figures that were so critical to the league’s ultimate success.

I have tabulated all of your votes, and below are the final results for The Readers’ Mt. Rushmores.  So looking at these team-by-team lists, which one is the best?  What vote came as the biggest surprise to you?  I will have to admit that Cookie Gilchrist receiving the second-most votes of any other AFL personality (tied with Lance Alworth) came as a bit of a shock.  As dominant a player as he was, Gilchrist only played in Buffalo for three seasons, and yet he received more votes than Jack Kemp, Ralph Wilson, Tom Sestak or Billy Shaw.  It just goes to show how captivating Gilchrist could be.  I’m just sad that I never got to see him play.