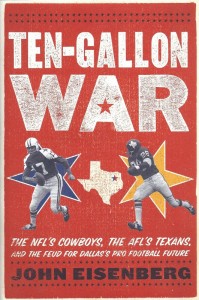 Much has been written about the early battles between the fresh-faced American Football League, and their rivals, the long-established National Football League.  Readers with an interest can find texts dedicated to the founding of the AFL, the AFL in the early years, the AFL/NFL merger, and all of the various subcategories that pertain to both leagues.  However, it wasn’t until just recently that fans could easily find the story of one of the greatest battles within the AFL/NFL war, the fight between the Cowboys and Texans for the love and support of the Dallas football fan.

Author John Eisenberg grew up in Dallas in the 1960s, and early on pledged his allegiance to the Cowboys, a story that he shares in his memoir, Cotton Bowl Days.  In his newest effot, Ten-Gallon War, Eisenberg moves out of the genre of fan chronicle, and instead gives a wonderfully detailed account of the founding of Dallas’s two professional football teams in 1960, their equally shaky beginnings, and the consequences that led Lamar Hunt to move his Dallas Texans north to Kansas City to become the Chiefs.

For those that have not heard the story before, Lamar Hunt started the American Football League after being rebuffed in his efforts to bring an NFL team to his hometown of Dallas.  He had unsuccessfully tried to purchase the Chicago Cardinals, and also inquired into possible NFL expansion.  When he learned that neither situation had any chance of coming to fruition, Hunt found other interested team owners and formed the AFL.  In an effort to thwart the new league (though they hotly denied Hunt’s new league as their reason for expansion), the NFL quickly reversed their earlier stance, and decided to form a new expansion team in Dallas.  Businessman Clint Murchison was given the franchise.  Murchison hired the soon-to-be-legendary football man, Tex Schramm, to build the team, and the battle for the loyalty of the Dallas football fan began.

John Eisenberg is an award-winning author, and as such it comes as no surprise that Ten-Gallon War was such an enjoyable read.  Eisenberg did a great job of getting inside this story and telling it from the perspective of both teams.  Eisenberg outlines the marketing strategies the both teams employed to draw fans, a game-by-game status of who was winning the battle, and ultimately, why the Cowboys were successful in capturing Dallas’s heart.

While telling the tale of two teams, Ten-Gallon War also introduces individual players.  Of particular importance in this book are Abner Haynes, Chris Burford, Sherrill Headrick and Tommy Brooker, all of whom made long and important contributions to the Dallas Texans/Kansas City Chiefs.

I have now read two of Eisenberg’s books, and have thoroughly enjoyed them both.  He is a skilled researcher, and his writing style is very smooth and easy to sit down to.  I hope that he has more AFL material in his future efforts, as I will certainly be looking forward to his future works.