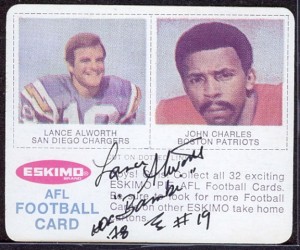 The 1969 Eskimo Pie set is a neat set of football cards representing American Football League players.  These cards can be difficult to find, and carry a reasonably-high price tag.  I found the following information about this set on the Beckett.com page.

The 1969 Eskimo Pie football card set contains 15 panel pairs of American Football League players. Each pair of individual player cards is most commonly collected together and, thus, cataloged as pairs below. Each could be cut off of Eskimo Pie Ice Cream boxes at the time and most, if not all, can also be found in a thinner sticker version originally attached to a green colored backing paper – two per panel for a total of four players. This thin sticker version appears to be more difficult to find than the card/box version. The panels measure approximately 2 1/2″ by 3″ when neatly cut. It is thought that the “card/box” versions are actually stickers as well which could be removed from the cardboard to which they are attached. The unnumbered pairs are checklisted below alphabetically according to the last name of the player on the left. The names are mistakenly reversed on the card containing Jim Otto and Len Dawson (card number 14). Finally, a 16th sticker was uncovered in 2012 which included an offer for four different NFL team logo jewelry premiums: tie clasp, tie tac, pendant, and charm bracelet with the Jets team logo featured. This premium offer sticker was issued along with the Lamonica/Frazier sticker pair and it measures the same size as a standard sticker pair. The catalog designation for this set is F73.