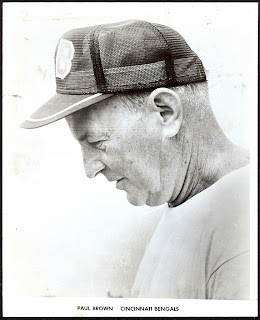 I added a new photo to my AFL collections recently, a 1969 Cincinnati Bengals team issued shot of head coach, Paul Brown.
Though he was a founding member of the Bengals, Brown’s greatest successes came as head coach of the Cleveland Browns in the 1940s and 1950s.  Despite being better-known for his body of work in the NFL, I immediately wanted to add the photo to my collection.  The image was actually used to make a relatively scarce football card that is one of the favorites of my collection.  The 1969 Tresler-Comet set consists of 20 cards of Cincinnati Bengals players.  The 20-card sets were premiums given away at Tresler-Comet gas stations.  Though not his rookie card, the Tresler-Comet card is Brown’s first AFL issue.  His being a member of the Pro Football Hall of Fame, having passed away in 1991, and the card being autographed make it all the more desirable. 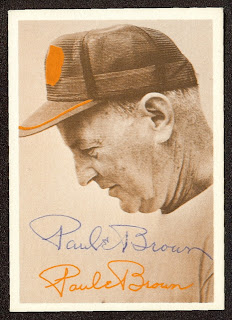 Collecting these “match prints” is an interesting tangent from mainstream card collecting, and something that I enjoy.  It is interesting to learn about the wide range of photos and images that were used to produce cards during the AFL years.  Wire service photos, team issues, college press shots and a variety of other image sources were used, and then often, but not always, air-brushed to somewhat resemble the team featured on the card.  It was a far cry from the gorgeous photography used to make modern trading cards, but the simplicity of the images also recalls the days before professional football was a multi-billion dollar business.
By Todd Tobias|2011-09-25T17:15:00-07:00September 25th, 2011|AFL, American Football League, Cincinnati Bengals, Paul Brown, Tresler-Comet|15 Comments