I have a weakness for collecting football cards autographed by the American Football League players.  I’m not talking about the new, shiny, gold-foiled throwback cards that can be purchased today for more-than-I-can-imagine per pack.  I like the old, original stuff that came with a stick of bubble gum for five or ten cents.  I collect all of the AFL cards from that era, from crude 1960 Fleer set through to the 43 players that I plucked out of the 1970 Topps set because they played as rookies in the AFL in 1969.  Some of my personal favorites are the 1963 Fleer set with Lance Alworth’s and Len Dawson’s rookie cards, and the famed 1965 Topps tallboys.
Just for good measure, in addition to the sets produced by Topps or Fleer each year in the 1960s, I have assembled my own “custom” sets.  These topical collections are based on themes, such as “The 20 Men who Played all 10 Seasons in the AFL,” or “The AFL’s Rookies of the Year.”  I enjoy collecting these subsets because although they necessitate my acquiring second and sometimes third copies of the same autographed card (or four, as is the case with Ron Mix’s 1967 Topps card), they represent players or coaches for a particular contribution to the game.  I am very particular about these special collections (possibly freakish, but hey, we all have our quirks),  preferring that the cards are selected from one of the original AFL sets (though 1970 Topps can be a passable substitution).  Though I love the set in general, my subset cards cannot come from 1965 Topps because those cards are taller than standard cards and thus require an odd-sized storage medium.  Maybe freakish is a little more apt than I like to admit.
I recently completed one of these collections, and thought that posting about it would be a great opportunity to introduce a new batch of AFL greats.  Former Buffalo Bills defensive back, Butch Byrd, returned a couple of freshly-signed cards to me in the mail this week, thus completing my collection of cards signed by The AFL’s All-Time Second Team.  So without further adieu, I present the men (and their bubble gum cards) that comprise that great squad.
HEAD COACH

Sid Gillman – Often referred to as The Father of Modern Offensive Football, Sid Gillman coached the Chargers from 1960-1969 and again in 1971.  He is credited with popularizing film study as a coaching tool, implementing the first strength and conditioning program in pro football, and producing a vertical passing game that stretched the defense, forcing them to cover every bit of the field.
OFFENSE

Len Dawson – A former NFL castoff, Len Dawson found a home with the Dallas Texans/Kansas City Chiefs.  The Hall of Fame quarterback was a six-time AFL All-Star, 1962 AFL Most Valuable Player (TSN), and MVP in Super Bowl IV.  After his playing career ended, Dawson became a member of the sports media, and served as host of HBO’s Inside the NFL from 1977-2001.

Cookie Gilchrist– Cookie Gilchrist was a hard-charging running back that could also be used at linebacker and place kicker.  The AFL’s Most Valuable Player in 1962 (API, UPI) rushed for 1,096 yards and 13 touchdowns in his first season in the league.

Abner Haynes – Running back Abner Haynes of North Texas, was the first pick of the Dallas Texans in the 1960 AFL draft.  He shined immediately in professional football, earning AFL Rookie of the Year and AFL MVP honors (AP, UPI) in 1960.  Haynes played eight seasons in the AFL, and was a four-time AFL All-Star and four-time All-Pro.

Charlie Hennigan – Charlie Hennigan was a high school biology teacher prior to playing for the Houston Oilers of the AFL.  During his first training camp, Hennigan kept his teacher’s pay stub, a $2,700 annual salary, in his helmet to remind himself that he must succeed in professional sports.  Succeed he did, becoming a five-time All-Star and two-time AFL champion.

Art Powell – Art Powell was a dominant wide receiver for the New York Titans, Oakland Raiders and Buffalo Bills.  After leaving the Philadelphia Eagles for the AFL in 1960, Powell formed half of the Titans’ potent receiving duo with Don Maynard.  In Oakland Powell was took advantage of Al Davis’s vertical passing game to become a four-time AFL All-Star.

Winston Hill – The massive offensive tackle from Texas Southern University came to the Jets in 1963.  The five-time All-Star was a devastating blocker at 6’4”, 270-lbs., and helped lead the Jets offense in Super Bowl III.  Hill played 14 seasons for the Jets.

Walt Sweeney – A first-round draft pick of the Chargers in 1963, Walt Sweeney immediately endeared himself to Chargers fans with his reckless play on special teams.  Sweeney was an end in college, but was moved to guard by the Chargers, and became one of the AFL’s best at his position.  Sweeney was an AFL All-Star from 1965-1969.  In 1968, Pro Football Weekly selected him to its combined all-pro team. 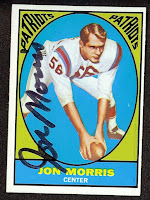 Jon Morris – Center Jon Morris was the Patriots’ team Rookie of the Year in 1964, their “Unsung Hero” in 1965, and an AFL All-Star from 1964 through 1969.  He played in 128 games for the Patriots, the eighth-best individual record in club history. After leaving the Patriots, Morris played three years (1975–1977) with the Detroit Lions, and his final professional season with the Chicago Bears in 1978.

Jim Turner – Jim Turner was signed as a free agent in 1964 by the New York Jets head coach Weeb Ewbank. “Tank” Turner kicked for 145 points in the 1968 regular season, with a pro football record 34 field goals. He kicked for nine points in the AFL Championship game win over the Raiders, and 10 points in Super Bowl III.
DEFENSE

Ron McDole – The Bills’ defensive captain, McDole was nicknamed “The Dancing Bear” because of his large size and nimble feet.  He anchored a tough Bills’ defensive line that held opponents without a rushing touchdown over 17 games in the 1964 & 1965, both championship seasons for Buffalo.  Barber was a two-time All-Star.

Rich Jackson – Rich “Tombstone” Jackson was signed as a free agent by the Oakland Raiders in 1966, but made his name as a member of the Denver Broncos, for whom he played from 1967-1971.  The two-time All-Star defensive end was known for moves such as the “head slap” and the “halo spinner” which he used to in battling opposing offensive linemen.  Jackson totaled 43 quarterback sacks in a career cut short by a severe knee injury.

Buck Buchanan – One of the first true “big men” in pro football, the 6’7″ 287-lb Buchanan was the first player selected overall in the 1963 AFL Draft by the Kansas City Chiefs.  Big Buck played in six AFL All-Star games, and teamed with Curley Culp, Aaron Brown and Jerry Mays to form the dominant front four that helped lead the Chiefs to victory over the Minnesota Vikings in Super Bowl IV.

Tom Keating – Tom Keating was drafted in the fifth round of the 1964 AFL draft by the Buffalo Bills.  He played two seasons in Buffalo before joining the Oakland Raiders.  The two-time All-Star was a two-time AFL-champion, and played in Super Bowl II against the Green Bay Packers.

Mike Stratton – This six-time All-Star was a defensive leader for the Bills during their championship seasons in 1964 & 1965.  He anchored a tough linebacking crew, and is most notably known for delivering the “hit heard ‘round the world,” a crushing blow to the Chargers’ Keith Lincoln, which deflated the San Diegans and helped seal the Bills’ championship game victory in 1964.

Larry Grantham – Larry Grantham, a five-time AFL All-Star, came to the New York Titans from the University of Mississippi in the 1960 collegiate draft.  His solid play from the right outside linebacker position helped the Jets reach the playoffs in 1968 and 1969, and win the famed Super Bowl III over the Baltimore Colts.  Grantham is one of just 20 players who were in the American Football League for its entire ten-year existence, and one of but seven AFL players who played their entire careers in one city.

Dan Conners – A fifth-round pick out of Miami, Dan Conners was a fixture at linebacker for the Raiders from 1964-1974.  The three-time All-Star led the Raider defenses that won an AFL championship in 1967 and faced the Green Bay Packers in Super Bowl II.

Butch Byrd – Butch Byrd was an excellent defensive back who doubled as a fine punt returner. Though he retired more than 35 years ago, the five-time All-Star still holds the Bills’ career records for interceptions (40), interception return yards (666) and interceptions returned for touchdowns (5).

Miller Farr – Miller Farr, a three-time All-Star, was the first round draft choice of the Denver Broncos in 1964.  He played for the San Diego Chargers in 1965 and 1966, and the Houston Oilers from 1967-1969.  He was the 1967 AFL co-leader in interceptions with 10.  Farr set an AFL record for the most interceptions returned for touchdowns in a single game (2) and tied the AFL record for a season (3).

Kenny Graham – Relatively unheralded coming out of college, Kenny Graham became a hard-hitting safety and punt-returner for the Chargers from 1964-1969.  At 6’0” and 195-lbs, Graham made his presence known with savage hits in the defensive backfield.  He was a ballhawk at safety, picking off 25 passes during his time in San Diego, five of which he returned for touchdowns.  Kenny Graham was a four-time AFL All-Star.

Goose Gonsoulin – An original Denver Bronco, Gonsoulin ended his career as the all-time American Football League leader in interceptions with 40. He made the AFL’s first-ever interception in the September 9, 1960, game against the Boston Patriots. He had seven interceptions in his first three games in the AFL, and his 11 pickoffs in 1960 are still a Denver Broncos team record.  Gonsoulin was an AFL All-League player in 1960, 1962, and 1963, and an AFL All-Star in 1961, 1964 and 1966.