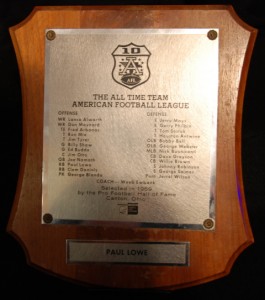 When the AFL and NFL finally merged after the 1969 season, the Pro Football Hall of Fame went about selecting AFL All-Time Team.  The announcement of awardees was made through the newspapers on January 14, 1970.  According to the Pro Football Hall of Fame website, the ballotting was particularly close at defensive tackle and cornerback.  The selection of a head coach was also very close, with Weeb Ewbank, Sid Gillman and Hank Stram all in the running.  The AFL All-Time Team was officially presented at the last game in AFL history, the All-Star Game that was held in Houston on January 17, 1970.

The members of the AFL All-Time First Team are as follows:

To commemorate the honor, players were given a plaque that measures 12″ by 10″, and lists the namesand positions of each team member, along with the 10-year version of the AFL shield.