The AFL at the 2017 National Sports Collectors Convention

The AFL at the 2017 National Sports Collectors Convention

I am currently in Rosemont, Illinois, working at the 2017 National Sports Collectors Convention.  This show is the annual Mecca for sports card and memorabilia collectors, and in many ways is as impressive as walking through a sports museum.

I walked the show floor all day today, looking for AFL material.  While standard Fleer and Topps cards are plentiful, I did not see an abundance of high quality items pertaining to “The Other League.”  There were a handful, however, that drew my attention.

Easily the most impressive piece that I saw was a 1968 Joe Namath game worn jersey that Heritage Auctions will be selling via live auction in October.  They put an estimated value of $20,000 on this particular piece. 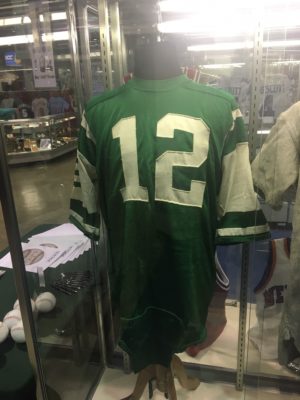 Down a couple of aisles from the Namath jersey, was a seller of game-worn material of all sports.  This person had two AFL jerseys, both of which will also be coming up for auction in the near future.  The first was Jim Otto’s 1969 AFL All-Star jersey, while the other was a 1967 Chargers jeersey worn by Ron Mix.  The ’67 Chargers shirts were a far cry from the beautiful blue and gold that we associate with the team at that time.  The Chargers attempted to use a cheaper material that season, and the resulting appearance is that or a glorified t-shirt.  Still, game worn jerseys of Hall of Fame AFL legends are nothing to sneeze at. 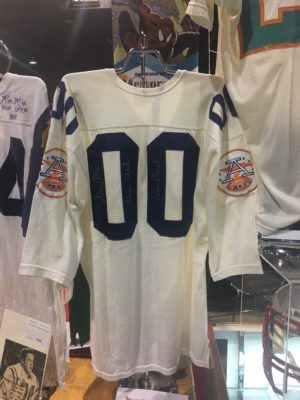 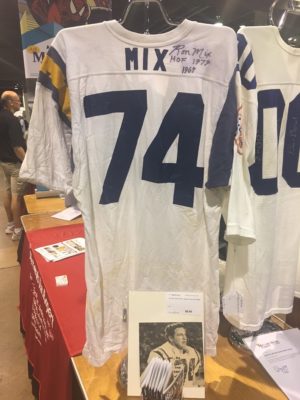 One item that struck my eye was a piece of original comic artwork pertaining to the 1963 AFL Champion San Diego Chargers.  This piece originated from the collection of the San Diego Hall of Champions Sports Museum, which recently shut its doors and consigned to have the archives sold. 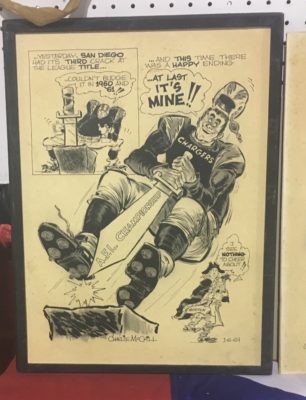 Lastly, and always dear to my heart, were a handful of signed AFL cards that I purchased from a couple of different dealers.  Sadly, every card in the group features a player who is now deceased. 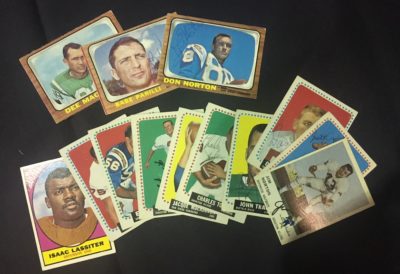 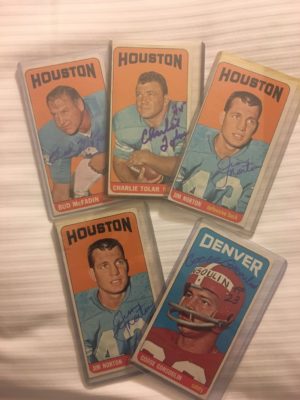 In speaking with one dealer, he said that he gets frequent inquiries about AFL material from his customers, but it rarely able to satisfy their needs.  He just can’t seem to locate anything beyond trading cards and game programs, which begs the question, “what happened to all of the stuff?”