Football historian, Bob Swick, recalls the AFL making a big splash in New Haven when the Buffalo Bills and New York Titans played an exhibition game in Connecticut in 1962.  You can read more of Bob’s football history in his magazine, Gridiron Greats, which can be found at www.gridirongreatsmagazine.com. 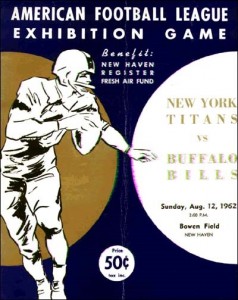 On August 12, 1962 New Haven, Connecticut, was the host for a preseason AFL game between the New York Titans and the Buffalo Bills to benefit the New Haven Register Newspaper Fresh Air Fund.  This charity that is still in existence today sends inner city youth to summer camps.  In 1962, there was great excitement that two professional football teams from the now established AFL would invade New Haven’s Bowen Field.  Bowen Field was a high school field and was also used by Southern Connecticut State University for their home football games over the years. I covered several football games for my college newspaper there while back in the 70’s. It was not uncommon for professional football teams to play in other areas of the country to drum up interest the game especially for AFL teams.  New Haven later on hosted the Fresh Air Fund Exhibition game at the Yale Bowl and featured the Jets and the Giants for many years.

The match up August 12, 1962, was between the New York teams.  9,505 Connecticut football fans packed Bowen Field for the game that warm Sunday afternoon.  The Bills defeated the Titans by a 20-10 score.  The Bills had played Quarterback Johnny Green for most of the game.  The Titans ended up using three quarterbacks for the day-Al Dorow , Butch Songin and Bob Scrabis.   The Titans were experiencing many financial issues at the time and through that entire 1962 season with the league taking them over on November 8, 1962. The Bills would end up playing another preseason game three days later on the 15th. And they ended up losing their first five games of the season.  For 1962 the teams would split their home and home series, the Titans taking the September 22 match in Buffalo 17-6 while the Bills defeat them in the last game of the season at the Polo Grounds 20-3.

I have bought and sold this game program several times over the years, it is one of the more difficult preseason programs to find from the AFL’s early days with both Titan/Jets, Bills and Connecticut collectors desiring it in their collections.    To me it is a great piece of early AFL history when teams barnstormed to gain fans and followers and professional football was alive and well in New Haven for one brief summer afternoon.