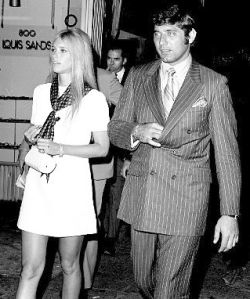 In the spring of 1969 he was at it again!  Nine years after then LA Rams GM Pete Rozelle fought, and lost, the AFL over the signing of LSU star Billy Cannon, the commissioner of the NFL looked to take down the AFL’s most publicized hero who had just knocked the NFL off of its pedestal in Super Bowl III.  Previously, in his ongoing disdain for the AFL, Rozelle coerced Atlanta out of their expansion plans by giving them expansion team, looked the other way when the Giants signed Pete Gogolak away from Buffalo and would eventually investigate Len Dawson days before Super Bowl IV, not to mention his bitter dislike and ongoing feud for his nemesis and former AFL commissioner/current Raiders owner Al Davis.  Now his sights were set on Super Bowl III MVP Joe Namath.

Running with reports that Namath’s new business establishment was a local watering hole for known mobsters and mafia personalities, Rozelle summoned the Jets quarterback to a meeting and issued a demand for Joe to sell off his interest in his Bachelors III Manhattan bar.  Located at 798 Lexington Avenue in NYC, the hot spot nightclub owned by singer Bobby Van, teammate Ray Abbruzzese and Namath had drawn the media’s attention when Bachelors III opened to rave reviews, while having to turn away overflow crowds.  With its overwhelming early success, plans were already in the making to open more places in Boston, Miami and New Orleans.

It was not so much Namath’s ownership of the bar as it was for the unsavory Mafia types who frequented the place that was the real brunt of the issue.  Pro football’s security forces had observed known gamblers and mobsters in the bar for months.  Concerned about the public image of League players, Rozelle did not like the sort of people who frequented Bachelors III, specifically because the known undesirables had such easy access to Namath with the fear and possibility of being controlled by them or at the very least, the perception of it.  He informed Namath of what his investigators had found in Bachelors III and told Joe that he would be suspended unless he got out of the place.  Rozelle pointed out a section of his contract which stated that players must never “enter drinking or gambling establishments” or “associate with notorious persons.”  Namath staunchly refuted the claims and heartily declared that he was blameless.  By this time Namath had become irritated with the accusations and angrily wondered where Rozelle got the audacity to dictate what he did with his personal life.  Privately, the 26 year old night club owner told friends he was not going to give in to Rozelle’s ultimatum.  In spite of Namath’s claims, Rozelle had little reason to believe Joe would not comply.

As time wore on Namath became more and more disillusioned and angry about the ultimatum and was digging in.  He was not going to back down, and on June 6 called a press conference in Bachelors III, where he tearfully announced that, instead of selling his interest in the night club, he would retire from football.  He emphatically maintained that he had done nothing wrong, and as a matter of principle was walking away from the game telling the press, “I’m not selling, I quit!”

Rozelle and Namath did not meet again for three weeks, and on June 26 when they did, nothing was resolved.

The media was having a feeding frenzy with all of the blood in the water and reported, while Namath was in Hollywood filming Norwood, that he would show up at the Jets’ training camp at Hofstra to force Rozelle‘s hand to officially suspend him.  But when Jets camp opened, Namath was not there.

With football’s most marketable player defying the edict of the commissioner, public sentiment swayed toward Namath, whom they viewed as a victim.  And as the player whose presence on Sunday afternoons meant millions of dollars in television ad revenue drew his line in the sand, Rozelle was forced to make the first move to reconcile the situation as quickly as possible.  He called Namath’s lawyer and requested a meeting the following afternoon.  On Tuesday, July 15, Namath met Rozelle at the commissioner’s office for what turned into a five hour meeting.  After leaving around 7 p.m., Namath and his team returned at 10 for two more hours of talks.   “Our conversations never reached heated proportions,” Rozelle said.  “They were low-key and amiable.”  On Wednesday the two talked again over the telephone, and that night Namath quietly slipped off to Hofstra, where he reiterated his side of the story to his Jet teammates.  Namath, too, was realizing that he had painted himself into a corner with his hastily announced retirement and how much money he was throwing away by giving up the game that made him famous.  Under strong advisement and seeing no other way out, he was resigned to signing off on Rozelle’s deal.  By agreeing to the demands that he relinquish his interest in the Bachelors III, as well agreeing to become more selective of the company he kept, Joe Willie was permitted to join the Jets at their Long Island camp.  The agreement was reached on virtually all of the commissioner’s terms, which included his right to turn down potential buyers as well as possible investors in any establishments Namath was to own in other cities.

At the press conference to announce his decision, and sitting next to the commissioner, Joe could not help but break into a grin when the Rozelle said “Joe has agreed to sell his interest in Bachelors III.”  When it was Joe’s turn to speak he again stated that “I’ve done nothing wrong, but because of the way some of the people have written and some of the things that have been said in the past, and because this has caused so much trouble for football and for me, we feel we should divorce ourselves of the restaurant at this time.”

On Long Island, as the Jets prepared for the College All-Star Game on August 1, back-up quarterback Babe Parilli got word of the news just before dinner.  While dining with the team that night, Parilli made the announcement that Namath was selling his interest in Bachelors III and would be in camp Monday night.  After six weeks of retirement, Joe was back where he should be, playing the game he loved.  On August 1, ten days after reporting to camp, Namath played against the College All-Stars, completing 17 of 32 passes for 292 yards, setting up field goals for 43, 42, 18 and 16 yards by Jim Turner and scoring runs of three and 35 yards by Matt Snell and leading his world championship Jets over the All-Stars 26-24.