The Blockbuster Trade that Didn’t Happen

The Blockbuster Trade that Didn’t Happen 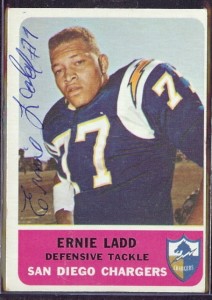 It would have been a big one.  San Diego Chargers defensive stars Earl Faison and Ernie Ladd to the Houston Oilers in exchange for John Baker, Gary Cutsinger and Pete Jaquess.  The Oilers would receive a dominant pass rush, and the Chargers in return would get three fine defenders.  The deal was signed and sealed, but was blocked in the delivery, by AFL Commissioner Joe Foss.

Faison and Ladd had long been frustrated with the Chargers and their head coach, Sid Gillman.  As a result, both perennial all-stars decided to play out their options in 1965, and see what they could get on the open market.  Their impending free agency offered the team that could sign both, an opportunity to add an immeasurable upgrade to their defensive line.  Though seemingly out of the running, Gillman and the Chargers held out hope that they could resign the towering defenders and keep their defensive squad intact. 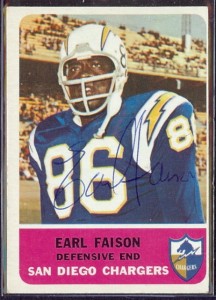 As the ’65 season came to a close, Houston Oilers owner, Bud Adams, made a claim in a Texas newspaper that he would spend up to a million dollars to sign the twin defenders.  Infuriated with Adams’ claim, and knowing that he could not come close to matching it, Sid Gillman orchestrated a trade with the Oilers that would at least get the Chargers some players in return for the departing Ladd and Faison.  Gillman grumbled about what he considered to be Adams’ “flagrant tampering,” and insisted that the Chargers had no opportunity to negotiate with his players once Adams had made his declaration.

The deal was announced during halftime of the 1966 AFL All-Star Game, and when the public address announcer informed the crowd of the news, one Chargers player on the Western Division team threw down his helmet and kicked over a sideline bench.

Although Sid Gillman publicly praised Baker, Cutsinger and Jaquess, as well as rookies Steve DeLong and Howard Kindig, who would be replacing Faison and Ladd, he still filed a formal charge of tampering with the league.  After reviewing the case, AFL Commissioner Joe Foss ruled in favor of Gillman and the Chargers, and blocked the trade.

Though San Diego retained Ladd and Faison, their reign as the Chargers dominant defenders was still over.  Having played out his option, Ladd signed free agent contract with the Oilers after the season.  He played all of 1966 and parts of 1967 in Houston, before he was dealt to the Kansas City Chiefs, where he ended his football career in 1968.  He went on to greater fame as a professional wrestler, a career that lasted through 1986.  Faison resigned with the Chargers, but suffered a back injury three games into the 1966 season and was released.  He was picked up by the expansion Miami Dolphins, but played just six more games before retiring from professional football.  He returned to San Diego, and entered the high school teaching and coaching ranks, from which he retired in 2003.