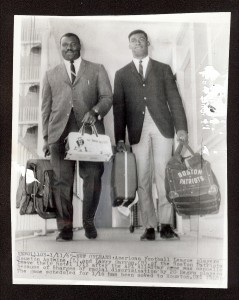 Looking at today’s NFL, it is difficult to believe that African-American football players ever had to deal with discrimination of any sort.  As of 2011, African-Americans made up 67% of the players on NFL teams, and professional football players of all races are now treated as some sort of minor deity by fans around the world.  That, however, has not always been the case…

January 11 will mark the 48th anniversary of the African-American players boycotting the AFL All-Star Game that was to be played in New Orleans.  After arriving at the airport, the black members of the all-star squads had difficulty getting taxi services to take them to their hotels.  Things only got worse from there, and ultimately the players, led by Cookie Gilchrist and Art Powell, decided that they would not play in a city that treated them so poorly.

It is difficult to find any good, first-hand information on the situation, and in fact, most record books simply state that the game was played in Houston, and do not even mention that it had to be shifted there at the last minute due to the issues in New Orleans.  Fortunately, Ron Mix, “The Intellectual Assassin,” penned an article for the January 18, 1965, issue of Sports Illustrated, which describes his participation in the boycott.  The article, which is titled, “Was This Their Freedom Ride,” is perhaps the best account of the situation that I have found, and is an important look back at players whom I believe has not been given the credit they are due for standing up not only for themselves, but for an entire race.