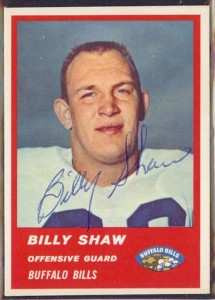 Billy Shaw holds a unique position in professional football history.  A guard for the Buffalo Bills from 1961-1969, in 1999, Shaw became the first person inducted into the Pro Football Hall of Fame to play his entire career in the AFL.  Among the other accolades that Shaw has earned are being named to eight consecutive AFL All-Star Games, being an eight-time All-AFL selection, a two-time AFL champion, a member of the All-Time AFL First Team, a member of the Bills Wall of Fame and the Bills 50th Anniversary Team.

Though they were overshadowed by their great defense, the Bills teams of the mid-1960s had some potent offensive stars as well, in Shaw, quarterback Jack Kemp and running back Cookie Gilchrist.  In this 2003 interview for buffalobills.com, Billy Shaw discusses how he broke into the league, adapted to a new position, and ultimately helped lead his team to consecutive league championships.