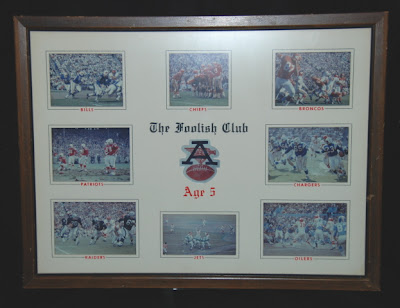 It isn’t often that a piece of memorabilia comes to auction from the collection of a former AFL team owner.  But just such a piece popped up on ebay recently, and I was fortunate enough to add it to my collection.  This item, which used to belong to former New York Jets owner, Sonny Werblin, also happens to highlight one of my favorite AFL sub-topics, the Foolish Club.
There were few in sports that gave the AFL owners much of a chance to succeed when they first formed the new league in 1959.  The National Football League had been around for more than 40 years when the AFL played its first season in 1960, and breaking the grip that the NFL had on professional football would not be easy.  In fact, there were so many naysayers chiding the AFL, that Wayne Valley, one of the original owners of the Oakland Raiders, began referring to the fraternity of team owners as the Foolish Club.  The name stuck, and to this day, references can be found to the Foolish Club in most AFL texts and documentaries.
As the AFL celebrated its fifth anniversary, Lamar Hunt, owner of the Kansas City Chiefs and founder of the American Football League, had a small number of framed pieces put together and given as gifts to each of the AFL owners at the time.  The collage features an AFL logo in the center, with “The Foolish Club,” and “Age 5,” surrounding it.  There are also color action photos of each of the original eight AFL teams.
I had first learned about these frames from San Diego Chargers minority owner, George Pernicano, who showed me one nearly 15 years ago.  I greatly admired the piece not only for its uniqueness, but as well for its historical significance and ties to Lamar Hunt.  So when I stumbled upon another one on ebay one morning, I was immediately interested.  I watched it for an entire week, and placed my bid as the auction came to a close.  Fortunately for me, no one else recognized the piece for what it was, and I was able to win the auction for the opening bid.
After trading information with the seller, I learned that that the piece used to belong to Sonny Werblin, former owner of the New York Jets, and the man who brought Joe Namath to the American Football League.  An email from the seller told me that this particular frame had hung in the New York Jets team offices in the 1960s, at a time when the team resided in the Fuller Building, an iconic 30’s style office building located on 57th and Madison Avenue.
I received the Foolish Club piece shortly after the auction ended, and I was more thrilled that I could imagine.  After taking a close look at each of the individual team photos, I have an even greater appreciation for each shot, the subjects of which are here: 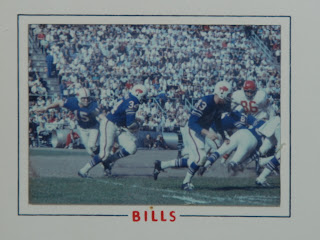 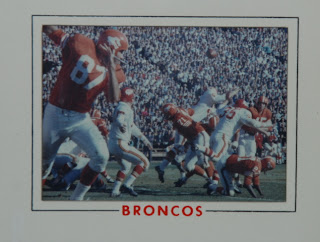 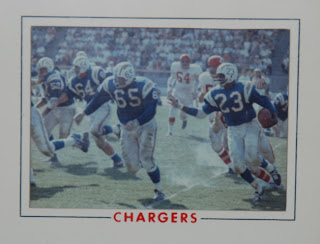 San Diego Chargers – Paul Lowe sweeps around the end behind the blocking of center, Sam Gruneisen. 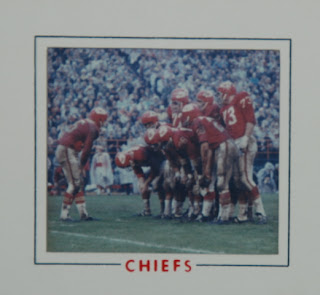 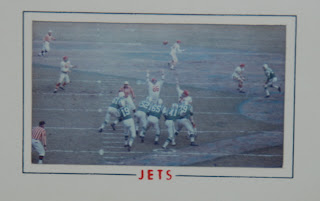 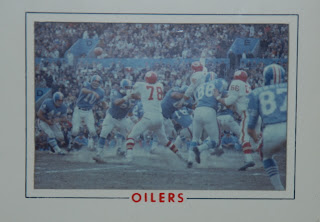 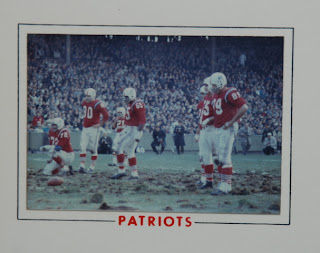 Boston Patriots – Jess Richardson, the last man to not wear a facemask in professional football, and the rest of his defensive line await the next play. 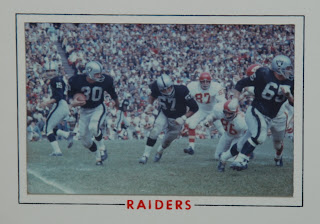 Oakland Raiders – Billy Cannon runs around the end behind linemen Wayne Hawkins and Bob Mischak.
This is one of the finest additions that I have made to my AFL collection in terms of historical significance.   Now my biggest challenge is trying to find a place to put it on my walls!
By Todd Tobias|2012-04-27T14:58:01-07:00June 20th, 2011|Dallas Texans, Kansas City Chiefs, Lamar Hunt, New York Jets, New York Titans, Sonny Werblin, The Foolish Club, Uncategorized|19 Comments