The Foreign Exchange Student Who Gave Up Jumping for Kicking!

The Foreign Exchange Student Who Gave Up Jumping for Kicking!

Dave Steidel looks at the only kicker in the Pro Football Hall of Fame.

Imagine having a scholarship to college, being the best in your athletic field, a three time Big Sky Conference/NCAA champion and then giving it all up to try another sport.  That is exactly what Montana State University ski-jumper Jan Stenerud did back in 1965. 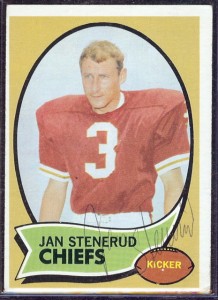 Stenerud, born in Norway, and who will turn 70 on November 26, 2012, was a champion ski-jumper attending school in Bozeman, Montana when, as a sophomore in ’65, he found himself in a unique and befuddling situation.  It was early in the school year when Jan was doing some pre-season training on the Montana State track to ready himself for the upcoming ski season.  While he was running the oval that surrounded the football field some of Stenerud’s friends were filtering on the gridiron prior to the day’s football practice.  The group was fooling around and challenging each other’s prowess for kicking the ball through the goal post uprights when they invited to Jan to give it a try.  His first attempt barely made it off the ground – but that was because his attempt was ala Lou Groza style; with is toe as he saw the other players doing.  But Stenerud was not about to let that kick be his defining moment in a sport that he knew literally nothing about.  His second kick attempt, still in his running sneakers, used the style which he grew up knowing how to kick a ball – with his instep as he was taught as a youth soccer player in his home of town of Fetsund, Norway.  This kick split the uprights from 40 yards out.  After matter-of-factly booting a second and third kick equally as accurate he moved back 20 yards to attempt one from an unheard distance of 60 yards away.  As the kick cleared the crossbar dead-center Stenerud, without a second thought, walked back to the track and continued is workout.

Unbeknownst to him, sitting in the stands was the State’s basketball coach whose eyes had been widened by Jan’s kicking exploits and when Jim Sweeney, the head football coach, walked onto the practice field minutes later, coach Roger Craft came running out of the stands to tell Sweeney what he had just witnessed.  The rest of the story can be found on his plaque in Canton, Ohio where in 1991 Stenerud became the first pure kick to be inducted into the Hall-Of-Fame.

Sweeney convinced Jan, a sophomore, to dress for Montana’s last game of the season.  So while he was technically ineligible, he sat on the bench hoping to familiarize himself with American game.  The next year the Norwegian ski-jumper set a small-college record with a 59-yard field goal and as a senior, when MSU’s punter was having trouble negotiating the ball through the windy conditions beyond the line of scrimmage, Sweeney sent Stenerud in to attempt a 113-yard field goal instead of punting.  Back then a missed field goal attempt was not brought back to the line as it is today.  Jan’s attempt took the ball to mid-field.

By 1967 Jan was in the pros attempting field goals, and making most of them, for the Kansas City Chiefs while admitting that his wife was still educating him on this game called football.  In his first game with the Chiefs Jan was already paying dividends.  Against the Oilers he kicked a 54-yard field goal.  He made 21 of 36 attempts, was perfect on 45 extra points and finished second in the AFL scoring race with 108 points.

In the final three years of the AFL Stenerud became the league’s premier kicker, making 70% of his field goal attempts – 78 of his 111, while the NFL/AFL average was 53%, and 122 of his 123 extra-point tries.  He also made 6 of 17 field goal attempts from beyond 50 yards in a time when the field’s hash marks were nearly twice as wide as they are today, making the angles that much more difficult.