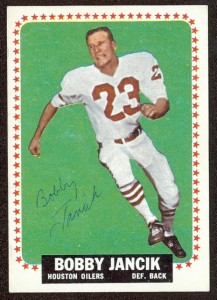 In collecting autographed sets of the 1960s AFL cards, I have come across several former players for whom I have needed multiple signed cards.  I am often able to locate the athlete, and mail the cards to them to be signed.  Such has been the case with dozens of former players.  However, there are times when the player is deceased, and tracking down autographed examples of their football cards proves to be quite a challenge.  Such is the case with former Houston Oilers defensive back and kick returner, Bobby Jancik, who appears in the 1964-1967 Topps sets.

It seems that after his career ended, Bobby Jancik returned to Texas.  What he did between 1967 and his death on December 24, 2005, what makes his autographed football cards so difficult to find, I have not been able to learn.  A Google search turns up a simple Wikipedia biography, but not much else.  I found Jancik’s obituary in the Houston Chronicle online archives, along with a note that he attended a Texans and Oilers reunion in 2002.  The Chronicle also had a note on November 3, 2004, stating that Jancik used a 5-iron on the 190-yard No. 12 hole at Legendary Oaks Golf Course to shoot a hole-in-one. 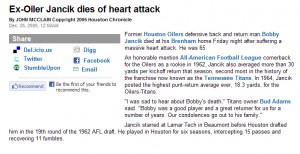 Bobby Jancik's obituary as it looks in the Houston Chronicle's online archive.

Though Bobby Jancik died nearly seven years ago, roughly 38 years passed between the end of his career and his death.  One would think that there would be plenty of his autographed trading cards in the hobby, yet that does not seem to be the case.  Was he adverse to signing autographs?  Some players are.  Did he slip off the radar of collectors?  This happens as well.  I don’t have the answer.  Perhaps one of Jancik’s former teammates, or someone else reading this post can help to shed some light on the situation.  Oh, and if anyone has any autographed Bobby Jancik cards, please give me a shout.  Until then, I will continue my search!