The Missing Card To The 1960 Fleer AFL Set

The Missing Card To The 1960 Fleer AFL Set 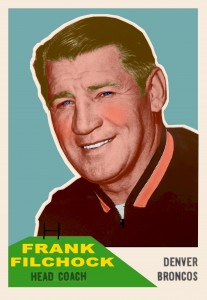 The question will never be answered, since any link to Fleer’s 1960 original AFL card set no longer exists.  But I still wonder why this maiden set that included 132 cards of players in their college or former team’s uniform, team logos and all but one of the head coaches, left Denver’s task master Frank Filchock out of it.

There was quite a cross section of players who showed up in this inaugural league set with a range of names and talent that hit every spot in the spectrum.  There were big-time college names that started with LSU’s Heisman Trophy winner Billy Cannon, former NFLers George Blanda, Jack Kemp and Frank Tripucka, soon to be league stars like Abner Haynes and Paul Lowe, short time players Bob White, Corky Tharp and Richie Lucas and even some who never answered the opening game bell like Ronnie Cain, Ed Denk and Ray Moss.

Using photos that were provided by the colleges there were a few players shown with your basic head shot while the majority were the classic posed-action shots that was so popular during this time (including my all-time favorite, #56 or NY Titan Gene Cockrell with the blocking dummy).  A quick check on Ebay will give you prices ranging $1.00 for non-star individual cards like Thurlow Cooper all the way up to $400.  for a Hank Stram.  The complete set with PSA ratings may tip the scales for as much as $2745.  while non-rated sets go between $600-$900.

The first set was unique in that it was the only set that included cards of the team coaches; Sammy Baugh, Lou Rymkus, Lou Saban, Buster Ramsey from the East and Sid Gillman, Hank Stram and Eddie Erdeltz from the West.  The only one missing was Filchock, an NFL quarterback for the Redskins in the forties and most recently a coach for the Calgary Stampeders of the Canadian Football League.  As a nine year old card collector when this set hit the stores I never knew if I had a complete set because a checklist card did not exist – so when I had a drawer full of cards with a few missing numbers and seven of the eight coaches in my possession I was always searching for the missing Denver coach without success.  It wasn’t until years later, when card collecting became more popular in the seventies that I was made aware that a Filchock card was never made.

A few years ago I came across a picture of Filchock from the Broncos archives and offered it to the remembertheafl.com website where photos of the seven 1960 Fleer coaches were posted but only an old Redskins card for Frank.  A few days later Ange Coniglio, through his photo shop wizardry had the missing card posted with the other coaches and also sent me a copy.

I no longer have my drawer full of 1960 Fleer AFL cards.  But what I do have is the missing Frank Filchock that I had always been searching for.