The Only AFL Team to Beat the Oakland Raiders in 1967

The Only AFL Team to Beat the Oakland Raiders in 1967

When the AFL began in 1960, the Raiders and Titans (later Jets), were two of the most feeble franchises in the league. However, by the late 1960s, both teams had been completely overhauled, and were among the AFL powerhouses.  Dave Steidel takes a look at how these two teams fared against each other in 1967.

Since Joe Namath was a rookie and became a starter late in 1965 the Jets and Raiders have played to final scores of 24-24, 24-14 Raiders, and in 1966, 24-21 Raiders and 28-28.  So when the two met in the fourth week of the 1967 season it was as both franchises were on the rise and each ready to establish themselves as the elite team of their respective divisions.  After two consecutive 8-5-1 finishes Oakland had finally found their leader in new quarterback Daryle Lamonica whom they acquired in a trade with Buffalo.  And Jet coach Weeb Ewbank, who had successfully mentored Johnny Unitas into the best quarterback in the NFL, was becoming more convincing in the change of mindset he felt necessary for his formidable but oft times distracted young play caller. 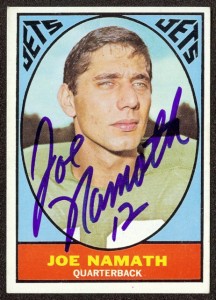 As the fourth week of the season in 1967 arrived both teams found themselves at the top of their divisions and facing off against each other in New York’s Shea Stadium on a brisk fall Saturday night on October 7.  The AFL’s top two teams and two top quarterbacks were greeted by a swirling 15 mph wind that caused both passers to make adjustments to the ever shifting current.  Throughout the night both Namath and Lamonica were forced to throw through a wind that hit them from all directions.  The Raiders, who were coming off of an ego boosting victory over last year’s AFL champion Kansas City Chiefs the week before brought their defensive scowl and new found long range passer with them to wreak havoc upon their eastern nemesis, while the Jets were riding the high of having themselves a new found quarterback of their own in a more mature and focused version of Joe Namath.  Since an injury sidelined fullback and superior pass blocker Matt Snell in the season’s first game the Jet pushed their swift and hard running halfback Emerson Boozer into a leading role and looked to rely on him against the imposing eleven angry men of Oakland.  The Raiders planned to take advantage of Jet injuries to Snell and guard Sam DeLuca by blitzing Namath early to create pressure and confusion for Namath, then, let the AFL’s best secondary lock down his receivers and hopefully force turnovers.  But several times during the first half Namath called Boozer’s number on delayed draws to wreak a little havoc of their own and frustrate the league’s most dominant defense into indecision.  By keeping the Raider defense on their heels, it gave the Jet front line of John Schmitt, Dave Herman, Randy Rasmussen, Winston Hill, Sherman Plunkett and tight end Pete Lammons, an advantage in the tug-of-war to protect Namath.

With a first quarter touchdown run of 7 yards by Boozer and a second quarter 1 yard plunge by veteran Bill Mathis, who was filling in for Snell, and a 27 yard field goal by Jim Turner, the Jets won the first half 17-0.  Another field goal by Turner in the third quarter increased the New York lead to 20-0 before Lamonica was able to whisk one of his passes through the Shea wind tunnel and find split end Bill Miller for a 12 yard touchdown pass. 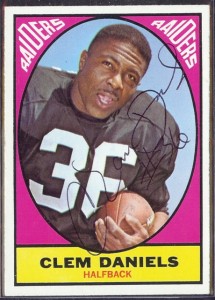 In one of the game’s major role reversals, it was the Jet defense that was looking like the league’s best as they held all-star halfback Clem Daniels in check, yielding only 37 yards on his 13 carries and completely shutting down fullback Hewritt Dixon, who ran the ball 7 times for a mere 10 yards.  They further stymied the Raider attack by intercepting four Lamonica passes on the night and held him to 16 completions on 38 attempts.

As the teams changed sides to start the fourth quarter Namath was at it again, confusing the Raider defense with a fake draw to Boozer and giving him enough time to connect with Mathis for 38 yards.  The play set up another 7 yard touchdown run by Boozer, making the score 27-7.  A 25 yard TD pass from Lamonica to Warren Wells finished off the scoring and gave the Jets their third win in four starts and handed Oakland their first and only loss of the season.

For the Jets, the victory showed them how far they had come and how good they could be, as they set the pace at the top of the East for all but the last two weeks of the season.  They finished in second place, one game behind the division winning Oilers and for the first time in franchise history posted a winning record at 8-5-1.

For the Raiders, the loss showed them how far they still needed to go before they could claim the AFL’s top spot, giving them the incentive to push harder, to go further.  Oakland finished the season with 13 wins against this only loss and dominated Houston in winning their first AFL Championship 40-7.

They were two teams on the rise and both with something to prove.  At season’s end Oakland would be in Super Bowl II.  The very next year the Jets would beat them in the AFL title game and make own their mark on history in Super Bowl III.  This game on October 7, 1967, was in many ways the threshold for both team’s rise to the top.