>The Pre-Foolish Club (or How the Raiders came to be)

Home/Los Angeles Chargers, Oakland Raiders, The Foolish Club, Uncategorized/>The Pre-Foolish Club (or How the Raiders came to be)
Previous Next

>The Pre-Foolish Club (or How the Raiders came to be) 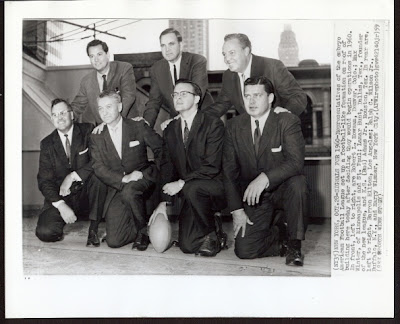 As was discussed in my last blog post, after a bit, the owners of the original American Football League teams came to call themselves the Foolish Club, because they must have been crazy to challenge the stranglehold that the NFL had on professional football.  The photo shown above actually shows the Foolish Club minus two important figures – Billy Sullivan of the Boston Patriots, and Mr. Wayne Valley of the Oakland Raiders – the man who coined the term “Foolish Club.”
Shown from left-to-right are the following men:
TOP ROW
Barron Hilton – Son of Hilton Hotels founder, Conrad Hilton, and grandfather of famed socialite, Paris Hilton, Barron was the original owner of the Chargers.
Ralph Wilson – A trucking magnate, Wilson is the original owner of the Buffalo Bills, a position that he still holds.
Harry Wismer – One of the true characters of the AFL, Wismer was the founder of the New York Titans, who later became the Jets.
BOTTOM ROW
Bob Howsam – Bob Howsam was the original owner of the Denver Broncos, but sold the franchise early on and became the general manager and club president of the Cincinnati Reds during their “Big Red Machine” days of the 1970s.
Max Winter – Max Winter would have been the head of the ownership group of the Minnesota AFL franchise.  More on him later…
Lamar Hunt – The founder of the American Football League, Lamar Hunt was the owner of the Dallas Texans, who moved three years later and became the Kansas City Chiefs.
Bud Adams – The other original Texan in the AFL, Bud Adams owned the Houston Oilers.  He moved the Oilers to Tennessee many years later, and he is still owner of the Tennessee Titans
Soon after this photo was taken, Billy Sullivan would join the group as owner of the Boston Patriots
Now back to Max Winter, Wayne Valley and the AFL, er, NFL franchise in Minnesota.  Originally, Minnesota was going to have an AFL franchise.  A onetime owner of the Minneapolis (later Los Angeles) Lakers, Winter had headed a group that like many before him, hat attempted to purchase the Chicago Cardinals of the NFL and move them to the city of their choice.  When Hunt proposed the idea of the AFL, Winter assembled a group of investors and committed to a Minneapolis franchise.
As AFL owners were busy building their league, NFL leadership did its best to undermine the new league and cause it to fold.  One of their many tactics was aimed at Minnesota.  Behind closed doors, the NFL promised Max Winter and his group an NFL expansion team if they would leave the AFL.  Pressured by city leadership to accept the NFL’s offer, Minnesota withdrew from the AFL.
This left a hole that needed to be filled in the league.  Presentations were made by groups from Atlanta, Oakland, San Francisco, St. Louis and Miami.  Noticing that his Chargers had no natural rivals, Barron Hilton lobbied hard for another team to be located in California.  Hilton was so adamant about the Oakland franchise in fact, that he threatened to withdraw from the AFL if Oakland was not granted the franchise.
And so it was, that the ownership group of eight men, including Y.C. “Chet” Soda, Wayne Valley (the creator of the Foolish Club moniker), Ed McGah and Robert Osborne were granted a franchise in Oakland, and thus the Raiders were born.
By Todd Tobias|2012-04-27T14:54:56-07:00June 29th, 2011|Los Angeles Chargers, Oakland Raiders, The Foolish Club, Uncategorized|16 Comments