The Reconstruction of a 1960 Chargers Team Photo

The Reconstruction of a 1960 Chargers Team Photo 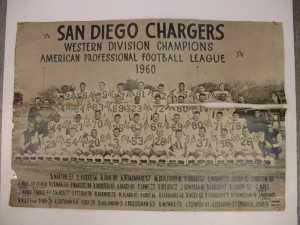 Several years ago, I was given a large photograph of the 1960 Los Angeles Chargers.  This particular team poster was actually produced in the offseason between the 1960 and 1961 AFL seasons, and was used to promote the Chargers in their new hometown of San Diego.  This particular 2″x3″ photo hung in an old sporting goods store, and by the time I received it, nearly 50 years after it was produced, the print was tattered and barely hanging together in some areas.

Coming from a background as a sportscard collector, I have always been very hesitant to have my memorabilia “worked on.”  Trading card “doctors” have hidden among the detritus of the memorabilia hobby for years, soaking, bleaching, trimming and generally altering trading cards in the hopes of passing off their wares as a truly rare, high-end collectible.  Some of these people are so good at disguising their work that they have been able to get their cards past third-party graders, who have mistakenly slabbed them as unaltered, and then sold them for large profits at auction, to collectors who thought that they were receiving honestly clean cards.  Despite my misgivings about card doctoring, the Chargers photo was not going to be good to anyone in its current state, so I took it down to a local art restoration company to see what they could do.

It just so happened that the woman who would be doing the restoration was a Chargers fan, and she was only too happy to work on this piece.  Over the course of several months she scrapped the original paper backing off the photo, and remounted the print onto an acid-free backing.  Then it was attached to a stiff board.  From there, cracks in the image were filled in, missing pieces were reattached, and surface was cleaned.  I picked up my newly reconstructed print and delivered it to my friend, Jeremy Dunaway, a fantastic framer in San Diego.  Jeremy and I have done many projects together, and his work is always top-notch.

Jeremy and I have always been on the same page when it comes to caring for historic pieces.  Acid-free mat boards and UV-protective or museum glass, are must-have components.  I cannot tell you how many times I have seen beautiful pieces – prints, photographs, jerseys, etc., – completely ruined because they were framed by a discount art store that used horrible methods and inferior materials.  So Jeremy and I can up with a simple, yet attractive framing plan for the Chargers print, and I let, knowing the final piece would look great.

A week later Jeremy texted me to say that my frame was finished, and that I could come and pick it up.  The overall piece is quite large, 36″x48″, and simply beautiful.  The grey mat and black frame compliment the black, and white photograph perfectly.  What was once a photo that was completely unusable, had become one of the favorite pieces of my collection.  I have no intention of ever selling it, but if I did, a complete disclosure of the reconstruction would be given.  And with that I feel good about bringing a historic piece back from the brink of death. 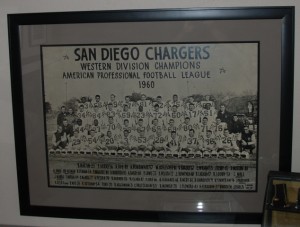