>The Sad Tale of Charlie Janerette

>The Sad Tale of Charlie Janerette 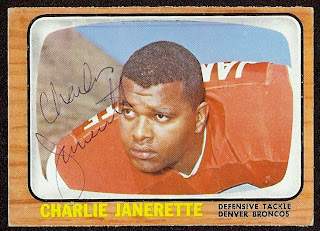 One of the reasons that I enjoy collecting cards autographed AFL trading cards is that in doing so, I am forced to do research on players whose careers and lives I may have otherwise overlooked.  Such is the case of the transient lineman, Charlie Janerette, whose autographed 1966 Topps card I recently added to my collections.
Charlie Janerette was drafted out of Penn State University in the fifth round of the 1960 NFL draft by the Los Angeles Rams.  Janerette made an immediate impact, and saw playing time in 12 games during his rookie season.
Janerette was lost to the Rams when he was selected by the Minnesota Vikings in the 1961 NFl expansion draft, but his time in Minnesota was short.  The Vikings traded Janerette to the New York Giants for tackle Ed Mazurek in February, 1961.
The big tackle enjoyed success with the Giants.  He played in 26 games for the Giants.  He also saw time in the 1961 & 1962 NFL championship games, though the Giants lost both games to Vince Lombardi and the Green Bay Packers.
Janerette joined “The Other League” in 1963, when he was signed as a free agent by the New York Jets.
After one season with the Jets, Janerette was part of a large trade that took place on New Year’s Day 1964.  The Jets sent Dick Guesman, Ed Cooke, Sid Fournet, Jim Price and Janerette to Denver for Gene Prebola, Wahoo McDaniel, Gordy Holtz and Bob Zeman.
Charlie Janerette played two seasons for the Broncos, before being released after the 1965 season.  He found his way back to his native Philadelphia, but he did not gradually ease into post-football life.  On October 26, 1984, Janerette was involved in a struggle with police that ended in him losing his life.  The following Associated Press article was printed on October 27, 1984.
Charles Janerette, a former National Football League player, was fatally shot today by the police, who accused him of trying to steal a squad car.
The police said Janerette, 45, had suffered from a mental illness for 12 years.
Janerette was an offensive lineman who played for four professional teams, including the Giants and the Jets, in a six-year career that ended in 1965.
The police said Janerette was shot at 2:30 A.M. in Center City.  He died 15 hours later at Hahnemann University Hospital.
Officer Kurt VonColln was questioning two moped drivers when Janerette walked up and got into the squad car, according to Al Lewis of the police public affairs office.
Officer VonColln removed Janerette from the car and held him against a wall to begin frisking him when “a scuffle developed and a shot was fired.”
A lawsuit was filed by Janerette’s family, who were eventually awarded $188,000, when Officer VonColln was found to be “justified, but negligent” in the shooting.
By Todd Tobias|2011-10-15T00:46:00-07:00October 15th, 2011|AFL, American Football League, Charlie Janerette, Denver Broncos, New York Jets|18 Comments