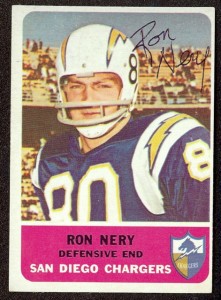 Perhaps the least-known member of the Chargers dominant defensive line of the early 1960s was Ron Nery.  A graduate of Kansas State, Nery stood 6’6″, and was listed at 247 lbs., though he once told me that he never weighed more than 215 lbs. during his football career.  Nery played for the Chargers from 1960-1962, and in today’s terminology would be considered a speed rusher or a pass rushing specialist.  Ron Nery left the AFL after splitting time with the Houston Oilers and Denver Broncos in 1963.

In the following interview excerpt, Ron Nery discusses how he became a member of the Chargers original Fearsome Foursome.

In 1959, I returned to the states after I requested and received an outright release from the British Columbia Lions of Vancouver in the Western Interprovincial Football League of Canada.  The Rams were still playing their preseason schedule.  I spoke briefly with Coach Gillman, who said it was too late to get on that season, but would I contact him for the 1960 season.  In the spring of 1960, I was living in Bakersfield as I had just married a girl from there who I had previously known in college at Kansas State College, as the school was known at that time.  I tracked the progress of the AFL to organize through the local newspapers.  When it looked like a done deal, I called the Chargers front office and was invited to drive to Los Angeles and sign a contract, which I did for $5,000.  It was then that I met Sid Gillman, Chuck Noll, Joe Madro and I believe, Al Davis.

Training camp started a few weeks later.  It seems like there were three groups of 33 players each reporting about a week apart.  This included a few of the players who reported for open tryouts in the spring of 1960.  During training camp I must have had six different roommates, only two of which I met or learned their names.  It seems there were over a dozen defensive ends, all of whom outweighed me and three or four were taller than me.  Training camp seemed to go on forever, seven days a week and mostly two practices a day.  We were finally given 1 ½ days off after a Saturday scrimmage and off to Laguna Beach we went.  I was driving a 1948 Packard that cost me about $90.00.  I made it back in good shape but a lot of guys (a bunch of defensive ends included) didn’t get back to Chapman College in time and were released.

That first training camp and preseason schedule, in which we won all six games, followed by player cuts, left us with 33 players to begin the first season.  After the third league game it seems like about a third of the players were replaced by late pre-season NFL cuts and we finally had our team – the 1960 L.A. Chargers.  Before the 1960 season, I had worked almost two months in the potato fields around Bakersfield.  I came into camp weighing about 205 pounds and gained eight or 10 pounds during camp.  The answer to question one, no one scouted me.  I came to the Chargers the hard way – lean and hungry.