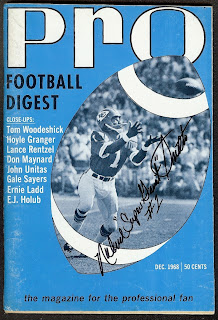 One of the fun things about the American Football League is that it was full of characters.  There was Ernie “Giant Cat” Ladd, who stood 6’9″ and weighed 325 lbs., and was a professional wrestler in the off-season.  Sometimes facing Ladd in the ring was “Chief” Wahoo McDaniel, a Choctaw-Chickasaw Native American, who lined up at linebacker and offensive guard for several teams in the AFL when he wasn’t traveling ont he pro wrestling circuits.  Hezekiah Ezekiel Braxton III lined up at running back for the San Diego Chargers in 1962, and big Ben Davidson, with his Dick Dastardly-inspired handlebar mustache, hit everything that moved (officials and coaches included) from his spot on the Oakland Raiders defensive line.  The Kansas City Chiefs had a tiny, little character of their own that they called the Super Gnat.
In a sport played by giants, Noland Smith was a 5′ 6-1/4″, 154-pound flanker from Tennessee State University.  Unfortunately for Super Gnat, the Chiefs had 6′ 3″ Otis Taylor playing ahead of him at flanker.  But instead of languishing on the sidelines, Smith made a name for himself as a kick and punt returner.  “He may be the most exciting runner in pro football,” commented the Chiefs’ head coach, Hank Stram in a 1968 issue of Pro Football Digest.
Noland Smith’s professional football career lasted only three seasons, during which he caught only two passes from the flanker position, but he excelled running back punts and kick offs.  In his rookie season of 1967, Smith led the AFL with 41 kick off returns for 1,148 yards.  Against Denver Super Gnat recorded the AFL’s first 100+ yard kick off return when he scorched the Broncos for a 106-yard return for a touchdown.  In 1968, Smith led the league with a 15.0 yard average on punt returns, and ran one all the way back.
Super Gnat’s star shone brightly, but burned out quickly.  After two full seasons in Kansas City, Smith split the 1969 season between the Chiefs and the San Francisco 49ers of the National Football League.  The following season he was out of the game.
By Todd Tobias|2012-07-02T07:18:03-07:00April 6th, 2012|AFL, American Football League, Ben Davidson, Ernie Ladd, Kansas City Chiefs, Noland Smith, Super Gnat, Wahoo McDaniel|22 Comments