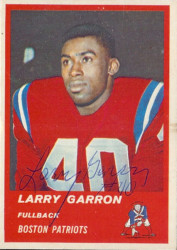 The Boston Globe recently ran an article in which Gino Cappelletti and Larry Garron reminisced about the early days in Patriots history.  Both gentlemen are, of course, AFL legends, and members of the Patriots All-Decade Team for the 1960s.  Garron, now 79, and Cappelletti, aged 82, have been around the Patriots since the team’s initial training camp in 1960.  They played through some rough patches, enjoyed an Eastern Division title, and experienced much individual success.  Cappelletti is the AFL’s all-time leading scorer, and Garron was selected to play in four AFL All-Star Games.

In the Globe’s piece, Two former Patriots recall the team’s first season, these two gentlemen recall the earliest of Patriot days, far before Belichick and Brady were ever imagined.

For more Patriots memories, you can listen to the interview below that I conducted with Gino Cappelletti in 2015. 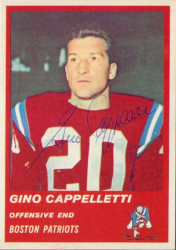