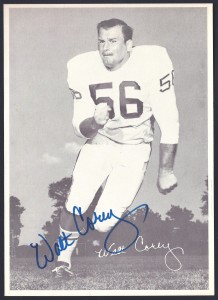 The youngest of 16 children in his family of Pennsylvania mill workers, Walt Corey was undrafted coming out of the University of Miami (Florida).  He signed a free agent contract with the Dallas Texans as a linebacker in their inaugural season of 1960, and his dogged determination and hard hitting earned him a starting position on the Texans’ defense.

Over the next four years, Corey averaged 8.75 tackles-per-game, and hauled in four interceptions while moving from left linebacker to the right.  He was a defensive stallwart from 1960-64, helping the Texans win their only AFL championship in 1962 (they would later win again as the Kansas City Chiefs).  He was named to the AFL All-Star Game in 1963.

After his playing career ended in 1966, Walt Corey stayed connected to the game as a coach.  His career on the sidelines began with a two-year stint as defensive coordinator at Utah State.  He held many different assistant coaching positions in the NFL, including handling the defneive line, secondary and ultimately defensive coordinator respoisibilities with the Chiefs from 1978-1986, and as defensive coordinator of the Buffalo Bills (1987-1994).  Corey was also the New Orleans Saints defensive line coach under Mike Ditka (1997-1999).