What Have You Done Now, Eugene? – A Book Review

What Have You Done Now, Eugene? – A Book Review 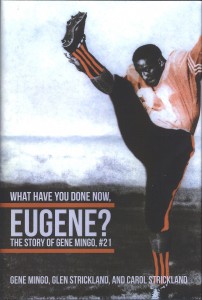 In their recent stomping of the Oakland Raiders, Denver Broncos kicker, Matt Prater, made a rare and unsuccessful pass attempt on a botched fake field goal play.  Shortly after, Broncos PR Director, Jim Saccomano, tweeted that Prater’s pass attempt was not the first ever by a Broncos kicker.  Legendary Broncos kicker, Gene Mingo, holds that honor.  In fact, in one 1961 game, Mingo threw two passes from his kicking position, both of which went for touchdowns of 50-or-more yards.

Gene Mingo’s new and very attractively designed autobiography, What Have You Done Now, Eugene? which he co-wrote with Glen and Carol Strickland, was released this past month.

Like Walt Sweeney, whose book I also recently reviewed, Mingo at one point had a problem with cocaine, which he originally began using to mask the pain of his injured back.  Drug use caused his life to spiral out of control.  The book begins with Mingo sitting in a jail cell after accidentally shooting his girlfriend while high on cocaine.  I found it an interesting way to begin one’s life story, as it automatically casts the subject in a bad light, and sets a tone for the reader.  However, as I got further along in the book, I found Mingo’s frankness to be refreshing.  Poor choices are a common theme throughout the book, but rather than play the blame game, Mingo comes clean and admits his errors.  In a world where athletes sometimes get away with murder (literally) and continue on as though they cannot be inconvenienced by the law, it was nice to see a former athlete admit that he was wrong, and attempt to make amends.

Going hand-in-hand with Mingo’s poor choices, is his ability to figuratively pick himself up and get back to task.  I liked what I perceived to be Mingo’s refusal to give up.  Despite not finishing high school or attending a college, Gene Mingo managed to have a long career in professional football.  When he was released by one team, he found another.  When his playing days ended, and he was humbled professionally by his lack of education, he still found work and enjoyed his life.  And at the lowest point of his life, addicted to cocaine and staring at a potential prison sentence, he again turned his life around, earned his GED and became a drug counselor.  In that regard, Mingo’s story is a good one to reflect upon.

From the point of view of an AFL fan, I think Mingo’s new book would have been enhanced by more recollections about his time with the Broncos, Raiders and Dolphins.  I recognize that this was an autobiography, but I think the book would have benefitted from more anecdotal material, if for no other reason than to give the reader a better understanding of the AFL through Mingo’s eyes.  The early Denver Broncos are perhaps the AFL’s least-documented team, and the authors could have done readers and football fans a great service with more team-based content.

Gene Mingo has lived an interesting life, and he has detailed it all in What Have You Done Now, Eugene?  While I referenced similarities to Walt Sweeney’s book earlier, this book had a more upbeat feel to it.  The bad spells in Mingo’s life were invariably followed by positive changes.  While I believe the book would have been made more enjoyable by a bit of polish and more stories of the professional football world around Gene Mingo, I enjoyed the book, and appreciated the opportunity that it gave me to learn more about this overlooked Bronco great.