When the AFL came to Allentown!

When the AFL came to Allentown!

Here is a fantastic piece by guest author, Dave Steidel…

On  July 19, 1965, New York Jet rookie Joe Namath appeared on the cover of Sports Illustrated with the headline “football goes showbiz”.   It was the kick-off to what would become a historic final five years for the coming-of-age American Football League.

Three weeks later Namath completed nine passes in his first taste of professional football, when the Jet rookies played the Patriot rookies in Lowell, Massachusetts.  Long before pre-season games were forced onto season ticket holders and brought to a team’s home venue, it was common place for both NFL and AFL teams to barnstorm their pre-season games in small market cities to create a following for both the league and the teams who played there.  Birmingham, Alabama; New Brunswick, New Jersey; Norfolk, Virginia and the like all reaped the economic benefits of pro football games and treated the event as if the circus were coming to town. 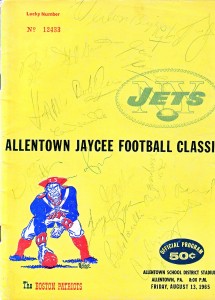 In 1965, so too did my home town of Allentown, Pennsylvania.  Playing host to the Jets and Patriots on August 13 was the Allentown School District Stadium that boasted a seating capacity of 24,000.  As a star struck and impressionable 14-year-old about to begin high school and probably the only AFL fan in my neighborhood, I was ecstatic about going to the open practice sessions both teams scheduled on the night before the game.   Most others who would attend probably either  hoping to validate what they thought was the absurdity of signing an untested rookie for $400,000 or to find out whether this other league was a bush league as they had read about from the large contingent of NFL writers.  Remember, this was Eagles and NFL territory!

As my friend and I arrived at the 6pm practice and walked around the track surrounding the field, the first thing we noticed was Namath in jersey, shoulder pads and shorts playing catch with Don Maynard near the sideline, standing about twenty yards apart.  As we witnessed the nearly effortless wiz of Namath’s throws, Maynard  just as effortlessly, raised his two hands to the numbers in the middle of his jersey and softly pulled the ball out of the air.  After a few more throws we were suddenly caught by surprise as Namath caught Maynard’s return and fired a bullet that hit the ground about eight yards short of Maynard but then skidded right back up in a perfect tight spiral right into Maynard’s waiting hands chest high.  My friend and I caught each other’s eyes as if to both say “did we just see that?”  We turned back to the field and quickly confirmed that we did, as we watch Broadway Joe do it two then three more times in succession.  Our jaws were now dropped with mouths wide open before closing into even wider grins and declaring “Man, this guy is goooood!”  To this day I cannot pick up a football without trying to duplicate what I had witnessed Namath do over and over again.  And to this day I never have! 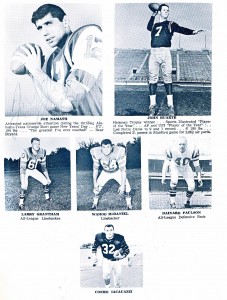 After the practice sessions every player hung around the field to mingle with the public while signing hundreds of autographs for the many fans who funneled onto the field.  I remember getting Tom Yewcic twice.  On the cover of my program also sits signatures of Don Maynard, Babe Parilli, Verlon Biggs, Joe Bellino, Bob Dee, Ron Burton, Don Webb, Bill Baird and others.  And on the inside sits the highlight of the night, and to me the only meaningful autograph I own, the rookie signature of  Joe Willie Namath on his picture!

The entire Allentown/Lehigh Valley community was a buzz about Namath’s appearance and a large crowd was anticipated.  The Chamber of Commerce sponsored the first pro-football exhibition game the year before by bringing the cross state rival Pittsburgh Steelers in to play the Philadelphia Eagles.  The crowd was easily among the largest crowds the stadium had ever experienced.  But the only highlight to that evening was when six-year-old Donny Osmond, who was appearing with the Andy Williams show at the Greater Allentown Fair two blocks away, sang the National Anthem.  This year it was hoped that catching a glimpse of the $400,000 quarterback would attract a crowd that would surpass that of year before.  But then the rains came and although the torrential rains did not cancel the game that evening, it did curtail Namath’s appearance.

It wasn’t until late in the second half that Namath relieved Mike Taliaferro and then called for eight consecutive running plays before taking to the air.  And while the rain continued to fall throughout the entire game, Joe did bring the crowd to its feet by providing the only rainbow of the gloomy evening.  A sixty-yarder to Don Maynard in stride for a touchdown.  Now it was the entire crowds turn to catch each other’s eyes and say “did we just see that?”  The answer of course was YES!  And I wanted to add – “and get used to it, because you’re going to see it happen many more times!”   It was the first AFL game I ever attended and that play was highlight of the my night.  The memory is still sweet to this day! 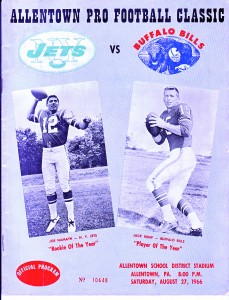 The Jets returned the following year to play the AFL champion Buffalo Bills.  I went to that one too, but it just wasn’t the same.  There is something sacred and personal about the first time we do things.  Whether it’s putting on  your  first football helmet, going on that first date or getting that first kiss – and yes, even that first taste of meeting and seeing  the professional football players from my beloved AFL!  Life is gooood!