Where is he now? Oakland Raiders Jim “Jetstream” Smith

Where is he now? Oakland Raiders Jim “Jetstream” Smith 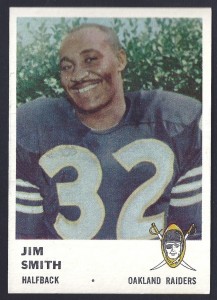 While the 1960 Oakland Raiders were not successful on the field, the team did not lack for colorful players.  Defensive lineman, Charlie Powell, never went to college, but was able to sandwich a successful professional football career in with playing minor league baseball and becoming the fourth-ranked heavyweight boxer in the world.  Guard Don Manoukian made a name for himself in college by riding his motorcycle into the Stanford library while wearing just a jock strap.  Then there was a speedy halfback/fullback named Jim “Jetstream” Smith.

Jetstream Smith came to the Raiders out of Compton City College.  “Jetstream” played all 14 games for the Raiders in 1960, carrying the ball 63 times for 214 yards and six touchdowns.  He averaged 3.4 yards-per-carry, but also fumbled four times.  He caught 17 passes out of the backfield for 194 yards and a touchdown, and averaged 26.2 yards on kick-off returns, with one touchdown there as well.  Despite putting up decent numbers in 1960, Smith was released by the Raiders.  He caught on with the Chicago Bears of the NFL in 1961, but carried the ball just three times for six yards.  And thus his football career came to a close.

Jetstream Smith, in addition to having one of the coolest names in sports history, has a 1961 Fleer trading card.  I have been unable to locate him, but I would very much like to see if he would sign it for me.  He happens to be the last living member of that set that I need to complete the collection.  With a name as common as “Jim Smith,” he has been next-to-impossible for me to find.  I am sure he has some very interesting early AFL stories, and I would like very much to speak with him, and learn more about his career.  Does anyone out there know where Jim “Jetstream” Smith is nowadays?