Who is on your AFL Mt. Rushmore?

Who is on your AFL Mt. Rushmore? 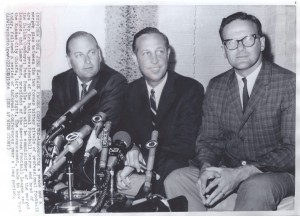 I have been seeing various Mt. Rushmore-type lists for a handful of NFL teams recently.  It seems to be a trendy thing to name the four most important figures or players in a particular team’s history.  It got me thinking about who would belong on a Mt. Rushmore for the American Football League.  I had initially thought it would be a pretty easy exercise – Namath, Alworth, Blanda and Bell, perhaps?  I think the first two are pretty solid, but spots #3 and #4 would probably be contested.

But then I thought a bit more deeply and decided that because of the nature of the league, any Mt. Rushmore would be incomplete without Lamar Hunt.  So who do you bump off?  Bobby Bell, perhaps the greatest pure football player the league ever saw?  George Blanda, who came out of retirement to lead the Houston Oilers to the first two league championships, and then achieve legendary status as a sometimes quarterback and kicker for the Raiders?

What about Hank Stram or Sid Gillman?  Al Davis was pretty damned important to the league as well, both as a coach and short-time commissioner.

In the end, I came up with my AFL Mt. Rushmore.  In no particular order…

Joe Namath – No, he didn’t have the greatest stats, and he threw a lot of interceptions, but Namath brought publicity and legitimacy to the league.  His guarantee and Super Bowl III victory cannot be discounted in over AFL importance.

Lamar Hunt – The founder of the league, and driving force behind its success and eventual merger with the NFL.

Sid Gillman – This one will probably draw some complaints, but I feel he was quite important.  Coming directly off a coaching position in the NFL, Gillman set a blistering pace for AFL head coaches in the early years, as well as illustrating to many how to be a head coach.  Al Davis, Jack Faulkner, Chuck Noll, Bum Phillips and scores of others benefitted from being on his staff, and though his teams only won one league championship in five opportunities, many feel the ’63 Chargers were the first AFL team that could have beaten a rival NFL champion.

The fourth and final spot on this list was ridiculously difficult to select.  In the end I came up with another name that will likely be contested, but I have my reasons…  Sonny Werblin.  Yes, he only owned the New York Jets for five years, but he made an immediate and lasting impact on the AFL.  First, when the AFL’s representation in the largest city in the country was about to go into bankruptcy, Sonny Werblin bought the franchise and quickly provided financial security.  He then negotiated a television deal with NBC which provided a huge influx of cash to all AFL franchises, and allowed them to continue fighting the NFL for high-priced rookie talent.  Werblin signed Joe Namath to a record-setting contract in 1965, which in turn brought the NFL the realization that soon o team, regardless of league, would be able to afford escalating layer contracts in the leagues could be played against each other.  Lastly, shortly after he sold the Jets, the team that he built stunned the world and won Super Bowl III.

Agree or not, that is my Mt. Rushmore – Joe Namath, Lamar Hunt, Sid Gillman and Sonny Werblin.  What do you think?