Why the Chargers Left Los Angeles

Why the Chargers Left Los Angeles 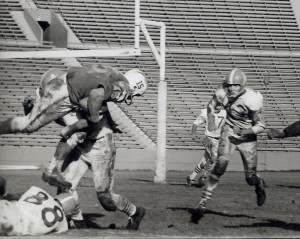 I have been asked on a number of occasions why the Chargers left Los Angeles.  Really, the answer is quite simple.  They didn’t draw enough fans.  Take a look at the photo of Jack Kemp leaping while being tackled.  See the stands in the background?  This photo was taken during a regular season home game on November 13.

The Chargers played their home games in the Los Angeles Coliseum, which also happened to be home to the USC Trojans and Los Angeles Rams.  At best, the Chargers were the third-tier football team playing at the Coliseum in 1960.  At the time, the Coliseum had a seating capacity of more than 100,000.  The Chargers 1961 media guide lists their 1960 average home attendance as being 15,768, and that does is not differentiating paid attendance from those who attended games with complimentary tickets. 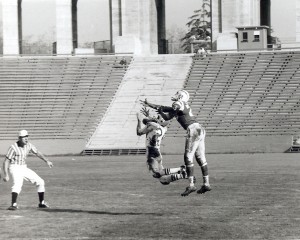 There are some photos of 1960 Chargers games that show what appear to be packed stands.  What one must keep in mind is that the fans were concentrated into certain sections of the stadium, for example, around the 50-yard line.  While that areas appeared to be full, the vast majority of the seating bowl remained empty.

Perhaps former Chargers’ center Don Rogers said it best.  “It was pretty obvious that we weren’t making any headway in Los Angeles.  I don’t know if you’ve been in the Coliseum, but to get from the dressing rooms to the field you go through these really long tunnels.  Every time we’d come out on the field, Don Norton and I would always be next to each other and we’d say, ‘They’ve stayed away by the thousands.’  Nobody was there.  A couple thousand people in the stadium and then they’d start putting them all together.  You’ve got this 100,000-seat stadium and you’ve got 2,000 people there.  We never did draw very well.”