Willie Evans of the Buffalo Bills

Willie Evans of the Buffalo Bills 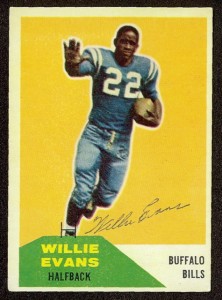 Willie Evans had already made a name for himself in the football circles around Buffalo, New York, before he ever thought of trying out for a spot on the inaugural Bills squad in 1960.  Evans had been a star running back for the University of Buffalo, and had been a member of the team when they won the 1958 Lambert Cup, as the best small-school football program in the eastern United States.  Shortly after the completion of their 8-1 season, the University of Buffalo Bulls were invited to play the University of Florida in the 13th annual Tangerine Bowl.  It was a cause for celebration, as it was to be the first bowl game in the school’s history.

But the excitement surrounding their success did not last for long.  Shortly after the invitation was extended, the Bulls learned that two of their players would not be able to play in the game. They had not suffered injuries, or broken team rules.  Mike Wilson and Willie Evans would not be allowed to play in the Tangerine Bowl because they were black.

The Orlando High School Athletic Association, which held the lease on the Tangerine Bowl Stadium, did not allow blacks and whites to play together in their facilities.  Head coach Dick Offenhamer put the decision in the hands of his team.  The Bulls answered by unanimously refusing the bid, preferring to stand together as a team, to playing without two of their teammates.

The tale of the 1958 University of Buffalo Bulls has been told in many forms since then.  A book, “Brothers Tonight We Sing The Chorus Free,” by Rocco Versace, a documentary, “Together We Stand,” by Peter Johnson, and a screen play, “Bull In The Ring,” by Frank Rossi, all convey the story.

After graduating from the university, Willie Evans was drafted by the Buffalo Bills in the 1960 AFL Draft, and Fleer produced his trading card that year as well.  Evans’ professional career did not come to fruition, however, as he was later released by the Bills.

Evans stayed in the Buffalo area, and taught in local schools for more than 30 years.  He also ran a city parks program, and coached several youth sports.  He is currently an advisor for the University of Buffalo Alumni Association.