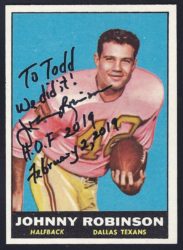 Putting together sets of autographed AFL trading cards has been my primary collecting focus for the past several years.  Finding the cards, researching the athletes, sending inquiries and locating previously autographed cards of long-deceased players has proven to be a very enjoyable process.  I am attempting to collect completely-autographed sets of AFL cards.  For the sets that include both AFL and NFL players (1961 Fleer & Topps, 1968 & 1969 Topps), I collect only the AFL portions.  For the 1970 Topps set, I have only collected the rookie cards of players that had played in the AFL in 1969, or before.  Also include here are pages dedicated to regional and team issues made for AFL teams.

Tales from the American Football League Autographed Card Collection – This is the story of how my collection of autographed AFL trading cards began, and some of the more interesting encounters that I’ve had along the way.

1960s Lee Clothing Company Premiums – Little is known about this issue.  These postcard-sized pieces were produced by the Lee Clothing company and distributed at department store autograph appearances over the course of multiple years in the early 1960s.  There is no known checklist and new players are still being discovered.  Both AFL and NFL players have cards that were produced by Lee.

1960 Fleer – The first of the AFL sets, 1960 Fleer is known for an overall lack of quality control.  Produced during the original training camp, more than a quarter of the players in this set did not actually make final rosters, and thus never played in the AFL.  Other issues aside, this set does include rookie cards of a number of prominent AFL stars, including Ron Mix, Jack Kemp, Abner Haynes, Paul Lowe and Billy Cannon.  As well, this is the only regular issue AFL set to include coaches cards, and Hall of Fame members Hank Stram and Sid Gillman have their rookie cards in the 1960 Fleer set as well.

1961 Fleer – Fleer put out a single set of cards in 1961, which featured players from NFL teams in the first series (cards 1-132) and players from AFL teams in the second series (133-220).  Notable AFL players, Tom Flores, Johnny Robinson, Jim Otto, Don Maynard and Lionel Taylor all have their rookie cards in this set.

1961 Golden Tulip San Diego Chargers – In 1961 the Golden Tulip Potato Chip produced a set of 22 trading cards of Chargers players that were included in their bags of chips and distributed in the San Diego area. The card backs are all identical and feature an offer for an 8″x10″ photo of a Chargers player in exchange for mailing in five individual cards of the same player.

1962 Union Oil San Diego Chargers – This 16-piece set consists of roughly 6″ x 8″ pictures featuring the artwork of an artist named “Patrick.” Printed on thin stock, these items have a player biography on the back, the Union 76 logo, and were distributed via Union Oil gas stations.

1963 Fleer – In my mind, the 1963 Fleer set (along with 1965 Topps) is one of the two premier AFL sets of the decade.  The set is considered to be complete at 88 cards, but there is also an unnumbered checklist.  The key rookie cards in this set are Nick Buoniconti, Cookie Gilchrist, Len Dawson and Lance Alworth.

1964 Topps – Topps took over making AFL cards in 1964, and doubled the size of the sets that Fleer and produced in 1962 & 1963.  The cards were produced in a single series, and Topps also introduced team cards with the ’64 set.  Key AFL players to make their cardboard debuts in this set include Buck Buchanan, Bobby Bell, John Hadl, Daryle Lamonica, Gerry Philbin and Dave Grayson.

1964 Topps Team Cards – Regular cards in the 1964 issue, this was the only year that Topps produced team cards for their AFL sets.  These cards make excellent autograph media for players, coaches, owners, font office personnel and others who were not pictured on cards of their own.

1965 Topps – Topps increased the size of their football cards with the 1965 set.  Measuring 2 1/2″ x 4 11/16″. these cards are refered to as “tallboys” among collectors.  This classic AFL set is perhaps known best for containing the Joe Namath rookie card.  As well, hall of fame members Willie Brown and Fred Biletnikoff have their rookie cards in the ’65 Topps set, as does AFL bad boy, Ben Davidson.

1966 Topps – Topps dropped their set from 176 cards in 1965, to 132 cards in 1966, and went with a horizontal, wood-grain design.  The lone vertical card, the Funny Ring checklist, is actually a checklist of the cardboard Funny Rings that were inserted into packs, rather than an actual football card.  Otis Taylor, Wendell Hayes, Jim Turner and George Sauer Jr., have their rookie cards in the 1966 Topps set.

1967 Topps – The 1967 issue was the last of the AFL-only sets.  The ’67 set, like that of 1966, contained 132 cards and grouped the players by team.  Noted AFL stars, Wahoo McDaniel, Speedy Duncan and Kent McCloughan, had their rookie cards in this set.

1968 Topps – Topps became the lone major producer of football cards in 1968, and thus included both AFL & NFL players in their 1968 issue.  This set also includes the Cincinnati Bengals, who were an AFL expansion team in ’68.  Key AFL rookie cards in the set are Bob Griese, Floyd Little and Jim Nance.

1968 Topps Posters – These 5″ x 7″ posters were folded and inserted into first series wax packs of 1968 Topps football cards. There are 16 pieces in the complete set, six of which feature AFL players.

1968 Topps Stand Ups – This 22-card insert set contains seven AFL players, the key of which is Joe Namath. The cards are perforated so that the player may be “punched out” and set up to stand on its own.

1969 Topps – The final Topps set of the decade was again a mix of AFL & NFL players.  The Frank Buncom card (#143) is the most challenging AFL card of the decade to find in an autographed form, as Buncom died of a pulmonary embolism on September 21, 1969.  The key AFL rookie cards in this set are Jerrell Wilson and Larry Csonka.

1969 Topps 4-in-1 – This insert set is made up of 66 cards that feature four perforated “mini-cards” each. The “mini -cards” were meant to be separated and stuck into accompanying albums. Twenty-five of the 66 cards feature only AFL players.

1970 Topps – Though produced during the first season post-merger, I have collected the 1970 Topps rookie cards of players who made their debut in the AFL, but did not have a card produced until 1970.  Notable AFL rookie cards in this set include George Webster, Rich Jackson, O.J. Simpson, Greg Cook, Elvin Bethea, Jim Lynch, Dick Post and Jan Stenerud.

1987 Orange Crush Denver Broncos – This nine-card set recognizes the original members of the Broncos Ring of Fame, eight of which were with the team during the AFL years.

Autographed All-Star Game Boycott Card Collection – These 1965 Topps cards have been signed by members of the 1965 AFL All-Star Teams that executed the boycott of the game in New Orleans. They have added inscriptions acknowledging the protest.

Interesting Inscriptions – I have requested specific inscriptions  these cards signed. Some are historic, others are simply fun. I always try to pair the proper year of trading card with the desired inscription.