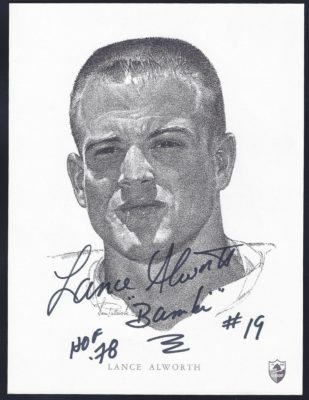 It should come as a surprise to no one by now that I enjoy collecting autographed AFL trading cards. They can be found in nearly every post on this site. But I recently completed the 1962 Union Oil San Diego Chargers set, a project that took me 18 years to finish and is cause for a post all it’s own.

The 1962 Union Oil San Diego Chargers set is a series of 6″x 8″ cards printed on thin stock and featuring Chargers players. The subjects are portrayed in detailed sketches by an artist named Sam Patrick, along with the player name and Chargers logo. The backs consist of personal statistics, a relatively detailed biography, the Union 76 logo and UNION OIL COMPANY OF CALIFORNIA. The cards were given with gasoline purchases to patrons of Union 76 stations in the San Diego.

The 16-card set includes many of the big Chargers names of the day, including Keith Lincoln, Paul Lowe, Ron Mix, Don Norton, Dave Kocourek and the members of the Chargers’ Fearsome Foursome, Ernie Ladd, Earl Faison, Bill Hudson and Ron Nery. The two most important cards of the set are undoubtedly the Lance Alworth and John Hadl issues, both of which were released prior to their standard rookie cards. Jack Kemp follows closely behind.

I began collecting this set in autographed form back in 2002. At the time, Charlie McNeil, Ron Nery and Don Norton were the only three players who were already deceased. Sadly, Ernie Ladd, Earl Faison, Bill Hudson, Dave Kocourek, Keith Lincoln, Jack Kemp and Chuck Allen have since passed away as well. I had originally been able to add the majority of the players to my collection rather easily. Most were obtained via through-the-mail autograph requests, but a couple were collected in-person. However, I sat stuck at the 13/16 point for a good many years before the final three came to me slowly and from various sources. It was just last week in speaking with a fellow collector who informed me that he had obtained an autographed Charlie McNeil in a small group of vintage signed pieces. We worked out a trade via text and I was finally able to close the book on the 1962 Union Oil San Diego Chargers set.

You can find these cards occasionally on eBay. As I mentioned, the Alworth in particular is desired by collectors and can come with a decent price tag. Jack Kemp and John Hadl are popular as well, but most of the others are relatively inexpensive.