Lance Alworth, a Great for the Ages…

Lance Alworth, a Great for the Ages… 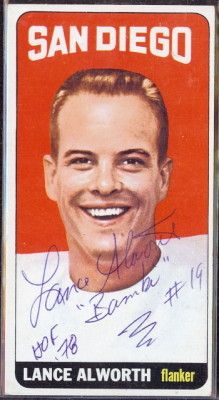 You might not have realized it, but there are several excellent Facebook pages dedicated to the American Football League. They contain a lot of random stuff posted by fans, but it seems that someone posts a photo of Lance Alworth at least once a week. It is interesting because regardless of their location or team loyalty, everyone has great things to say about Alworth, and honestly, why wouldn’t they? The guy could flat-out play football. And he wore what might the coolest uniform in sports history, played in the San Diego sunshine, caught long passes from John Hadl, had movie star looks, and the list goes on and on.

But back to the football part… I stumbled across this article that was posted back in January. It’s not exceptionally long or overly-flowery, but I thought it does a great job of presenting the proper lenses through which one should judge Lance Alworth’s contributions to the game. The article details changes in the game over the last 50 years and why they account for the inflated offensive numbers we see today, which helps to “even the playing field” when comparing Alworth to more modern players.

You can search “Lance Alworth” in this site and find many different articles, interviews, images and more. One of my favorite spots happens to be the Lance Alworth Hall of Fame Photo Gallery, that contains the images that Alworth and his family took during his induction weekend in 1978.