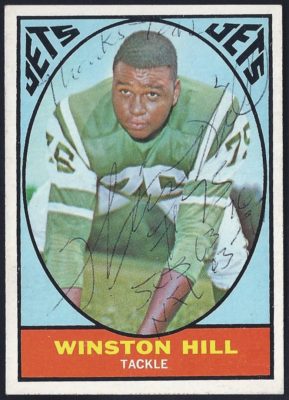 In conjunction with the NFL’s 100th anniversary, the Pro Football Hall of Fame has expanded their induction class this year to include 10 senior members. While the intention of the larger class was at least partly to open up the log jam of worthy candidates, the AFL will be again be given short shrift in the effort. While there are many former AFL stars worthy of induction, former New York Jets’ tackle, Winston Hill, is the only AFL player to be named a Hall of Fame finalist.

My commentary is no slight on Hill, who is an outstanding candidate and long overdue induction. It is more a statement of the American Football League again being overlooked by Hall of Fame voters. I do not think even the most ardent of fans believed that all of the deserving AFL’ers would be recognized, but to say that only one AFL star is worthy of being a top 20 candidate is an insult.

But let’s save the lamenting for later and celebrate what we have before us. The Jets Legend Winston Hill is a Pro Football Hall of Fame Finalist.