Jets’ Tackle Winston Hill is a Hall of Famer

Jets’ Tackle Winston Hill is a Hall of Famer 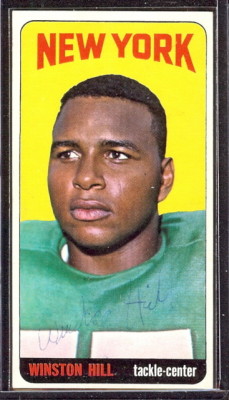 Last week I was busy bemoaning the fact that in their expanded 2020 induction class the Pro Football Hall of Fame only had one former AFL’er in their finalist group, the Jets’ tackle, Winston Hill. While I still believe that the AFL was shorted overall, I was thrilled to learn this morning that Winston Hill had been named one of 10 senior finalists for the Class of 2020.

Winston Hill was a legendary tackle and is the most decorated Jets’ player in team history. Quite an accomplishment when you consider some of the names that have worn the kelly green. Consider the following paragraph from an article posted today on the Jets website:

Hill, the most decorated Jet in franchise history, was chosen to play in four AFL All-Star Games (1964, 1967-69) and four Pro Bowls (1970-73). He holds the franchise mark for offensive linemen with 195 consecutive games played and 174 consecutive starts despite breaking a leg in the 1965 preseason and having his throat stepped on in 1974.

A quick glance at how Hill’s career compares to other Hall of Fame tackles makes one wonder why he was overlooked for the last 40 years of his life. A lack of appreciation for his successes, and that of the AFL in general, can be the only real excuse.

Winston Hill passed away in 2016. It is unfortunate that he is not around to enjoy the honor that eluded him during life, but you can rest assured that his teammates, opponents and AFL fans across the country will be pleased to hear his name read at the induction ceremony this coming summer.

One lesser AFL connection to this induction class is former Cleveland Browns end, Mac Speedie. After his playing career, Speedie was head coach of the Denver Broncos in 1964 and 1965.