Was Joe Namath the Best in the AFL?

Was Joe Namath the Best in the AFL? 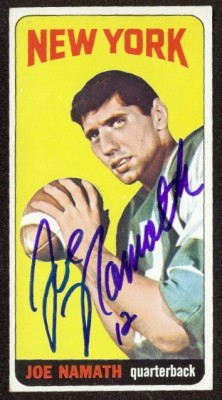 It is never easy to determine the best player a sport has ever seen. First of all, positions are so incredibly different that it’s difficult to judge which is most important. A quarterback or a running back? A smart middle linebacker or a near-automatic kicker? On top of that, comparing players from across generations is rendered pointless by advancements in training and strategy, rule changes, equipment, nutrition and any number of other factors. Still, we all love a good debate and so the comparisons continue.

I recently read an article that proclaimed Joe Namath to be the best player ever in the American Football League. The article gave all of the reasons that one would expect and some that I didn’t feel mattered: first round draft choice, rugged good looks, 27,000 passing yards, Super Bowl III, etc. A few good points were made, but I have to say that I just wasn’t swayed. I don’t see Joe Namath as the best player in the American Football League, although I do believe that he is probably the league’s most important player. There is a difference.

Namath was important because of the reasons stated above, as well as the fact that his signing brought importance to the AFL, his $427,000 contract was a major factor in forcing the AFL-NFL merger, his Super Bowl III win was a huge blow to the NFL, and his popularity was a constant, tangential promotion of the league. No other player affected the AFL quite like Joe Namath. But was he the best? I don’t think so. If I were to select one player who dominated his position like no one else, I think that I would have to bring Lance Alworth, Jim Otto, Bobby Bell, Willie Lanier, Jim Tyrer, Ron Mix and Willie Brown into the conversation and then begin from there. But then we get back to that question of importance of position and I’m still not sure how to answer that.