Critics of the AFL often cited weak defenses as the source behind the league’s very potent offenses.  Defensive schemes, they said, were weak, and secondaries, pathetic.  They fail to give credit to a particularly potent defensive tactic that was put to great use by Al Davis and the Oakland Raiders.  Dave Steidel takes a look at the bump and run.

The Bump and Run style of pass coverage is a strategy often used by defensive backs in which a defensive player lines up directly in front of a wide receiver and tries to impede him with arms, hands, or entire body and disrupt their intended route. 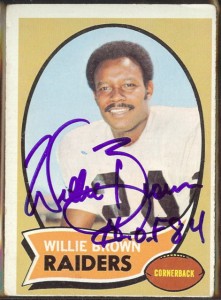 The bump and run came into pro football prominence in 1967 when Oakland Raider defensive back Willie Brown introduced it to the AFL.  He started covering receivers at the line of scrimmage and without fear of being beaten deep he bumped and detoured receivers to the part of the field he chose for them.  During this time in pro football the only time a defender had to be completely void of contact was when the ball was in the air.  Until that time, physical contact was fair play.

Brown, a defensive back at Grambling was undrafted when he tried out for the Houston Oilers but got caught in a numbers game and was one of the last players cut.  As word got out about Wood’s blanket coverage of Charlie Hennigan during scrimmages, the Denver rebuilding program was only too happy to bring him into their corral.  In 1963 head coach Jack Faulkner had the Broncos in winning state of mind after they had challenged in the western division race for most of 1962.  Faulkner had been on Sid Gillman’s staff at the University of Cincinnati and with both the LA/San Diego Chargers and the NFL Los Angeles Rams.

In the mid 1950’s while with the Rams as their defensive backs coach Faulkner had a recruit out of the University of San Francisco who made his name as a basketball specialist, K.C. Jones.

Jones was picked by the Rams as the 354th player drafted after he starred with Bill Russell on the NCAA basketball national championship team.  He was also selected in the 15th round of the NBA draft by the Minneapolis Lakers.  While with the Rams in training camp K.C. taught Faulkner his basketball style of tight man-to-man defense he thought would work to cover pass receivers, interrupting their flow and desired pass pattern the same way he would deny his basketball opponents.  And while Jones’ time with the Rams was short lived, his impact on professional football far outlasted him.

With Denver, Faulkner taught the young Brown the close-up, physical style of defense, but it was never used in the Bronco scheme.  When Lou Saban arrived in the mile high city and cleaned house following the 1966 season, Brown, now an all-league player for three years was traded to Oakland.  It was in 1967 with the Raiders that Brown would finally get his chance to use the bump and run. 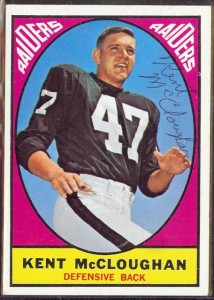 During training camp Brown taught the bump-and-run to Oakland’s other starting corner back, Kent McCloughan and the two became so successful at it that they sold coaching staff on it as well.  As Brown and McCloughan began to jam up their surprised and baffled receivers on the line like never before, they did not let them stray into any sort of designed pattern, and the bump and run became the most talked about innovation of the year, along with it the Raiders laid claim to the AFL’s lowest pass completion percentage, 41%.  The bump and run defense that Brown and McCloughan created and perfected was a trend setter,  and was so overwhelmingly embraced and imitated by other teams over the years that it became nearly impossible for receivers to escape it.  In 1978 the NFL changed the rule, making it illegal to come in contact with receivers beyond 5 yards of the line of scrimmage.

Willie Brown, is a member of the Pro Football Hall of Fame and is considered to be the father of the bump and run coverage.  Together, he and Kent McCloughan revolutionized pass defending in football, but we must not forget to also give further credit where it is certainly due.  We need to give credit to basketball Hall-of-Famer K.C. Jones for the blueprint.