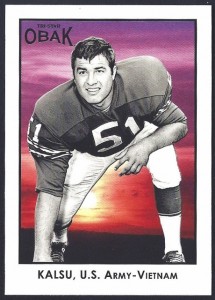 James Robert “Bob” Kalsu was an offensive guard at the University of Oklahoma when he was drafted by the Buffalo Bills in the eighth round of the 1968 AFL-NFL Draft.  He earned himself a position in the Bills starting line up in his rookie season, and played in all 14 games during the 1968 season.  Following his first season in professional football, Kalsu entered the Army to satisfy his ROTC obligation, and found himself in Vietnam as a member of the 101st Airborne Division in November, 1969.  In the summer of 1970, Kalsu’s unit came under enemy mortar fire at FSB Ripcord near the A  Shau Valley.  Bob Kalsu was killed in action on July 21, 1970.

Bob Kalsu was the cover athlete for the July 23, 2001, issue of Sports Illustrated.  The magazine featured an extensive article on Kalsu which can be found here – A NAME ON THE WALL