>1960 AFL Rookie of the Year & Most Valuable Player – Abner Haynes

>1960 AFL Rookie of the Year & Most Valuable Player – Abner Haynes 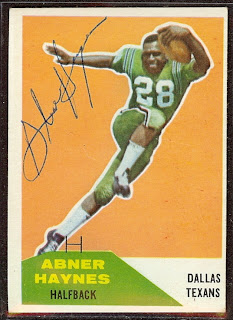 People remember the Boston Red Sox outfielder, Fred Lynn, as the winner of major league baseball’s Rookie of the Year and Most Valuable Player awards in the season of 1975.  The Seattle Mariners’ Ichiro Suzuki duplicated the feat in 2001.  But few sports fans recall that Dallas Texans’ running back, Abner Haynes, won the American Football League’s MVP and Rookie of the Year awards in the league’s inaugural season of 1960.
Abner Haynes is a Texas native, who played his high school ball at Lincoln High School in Dallas.  From there he moved on to North Texas State University.  He was drafted by the Oakland Raiders in the first round of the 1960 American Football League draft, but immediately traded to his hometown franchise, the Dallas Texans.  Haynes quickly earned the starting halfback position, and the rest, as they say, is history.
There is not a lot that Abner Haynes didn’t do in 1960.  He led the AFL in rushing attempts (156), yardage (875) and touchdowns (9), also in punt return yardage (215) and average (15.4).  Additionally, he finished in the top 10 in the league in kick off returns, receiving and scoring.
In the Player of the Year balloting, Haynes received 14 of 32 votes cast by a poll of the press, beating out the Chargers’ Jack Kemp, who received 10 votes. Haynes also won the AFL’s Rookie of the Year Award.  Though the league did not hold an all-star game in 1960, Haynes was named to the official all-league team.
Abner Haynes played eight seasons in the American Football League, with the Dallas Texans, Kansas City Chiefs, Denver Broncos, Miami Dolphins and New York Jets.  He retired after the 1967 season with 4,630 rushing yards on 1,036 attempts (4.5 average) and 46 touchdowns.  He also caught 287 passes for 3,535 yards and 20 touchdowns.  Haynes was named to the AFL’s All-Time Second Team.
By Todd Tobias|2012-03-29T15:50:00-07:00March 29th, 2012|Abner Haynes, AFL, American Football League, Dallas Texans, Denver Broncos, Kansas City Chiefs, Miami Dolphins, New York Jets|34 Comments