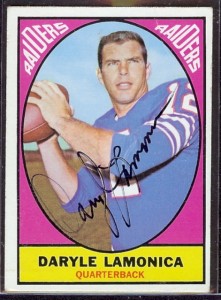 Daryle Lamonica began his career in professional football when the Buffalo Bills selected him out of the University of Notre Dame with their 24th-round pick in the 1963 AFL draft.  At 6’3″ and 215 lbs, Lamonica was a prototypical passer, who possessed keen maneuverability and a cannon for a right arm.  In fact, there was only one thing to keep Lamonica from achieving greatness in Buffalo.  Unfortunately for him, that thing was Jack Kemp.For the four seasons that he was there, the Buffalo Bills had the greatest quarterback tandem in the AFL with Daryle Lamonica and Jack Kemp.  And in fact, Lamonica played in 14 games-per-season in each of his four seasons in Buffalo, however he typically served in a back-up role.  But in 1967, Al Davis designed a trade that sent wideout Art Powell, quarterback Tom Flores and two draft choices to Buffalo.  In exchange, the Oakland Raiders acquired receiver Glenn Bass, one draft choice, and quarterback Daryle Lamonica.  Lamonica was the final piece that Davis needed, and his vertical offense was poised to take off.

Daryl “The Mad Bomber” Lamonica wasted no time putting the ball into the air, and leading the silver and black to victory.  In 1967, his first season in Oakland, Lamonica threw the ball 425 times, completing 220 of those passes for 3,228 yards and a league-leading 30 touchdowns.  The Raiders went 13-1 under Lamonica’s leadership, and ran away with the AFL Western Division title.  In the AFL championship game, Lamonica threw for two touchdowns and rushed for another as he led Oakland to a 40-7 victory over the Houston Oilers.

When the most valuable player voting was held, Daryle Lamonica was the top vote-getter among all three voting bodies, the United Press International, Associated Press and The Sporting News.