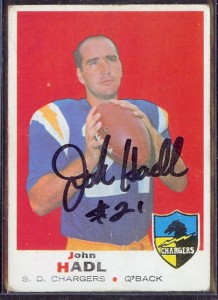 Today’s comparison is between John Hadl of the San Diego Chargers and two HoF quarterbacks, Sonny Jurgensen and Fran Tarkenton.

John Hadl is an interesting candidate for HoF consideration.  He had a long career, and excelled in both pre- and post-merger eras.  As the main implementer of Sid Gillman’s famed passing attack, Hadl led state-of-the-art offenses during the majority of his career, and was the starting point for the majority of Lance Alworth’s receptions.  Taking a look at total offensive production by team in the 1960s, the Chargers led all teams (AFL & NFL) in total offensive yards, and finished third (again, AFL & NFL) in scoring for the entire decade.  Lastly, consider the following quotes about Hadl.

“I wouldn’t trade Hadl for any other quarterback in pro football.” – Sid Gillman, 1968.