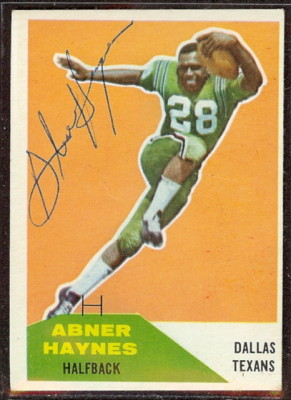 The American Football League was a cutting-edge type of organization. They had to be. As the new kid on the block, the AFL had to take advantage of any opportunity they might find to get a leg up on the NFL. Such was the reasoning behind their outlandish marketing, name the team contests, player names on jersey backs, exciting brand of football and much more. One other thing that the AFL did that the NFL was slow to catch up with was acceptance of the African-American athlete.

Stories have long been told about when the NFL had quotas for the black players on their teams, only even numbers of blacks (so as to not have mixed-race roommates on the road) and no black players on the bench, the AFL welcomed in players of all colors and from all areas. The AFL was the first league to tap the wealth of talent in the historically black colleges and universities, and Sid Gillman was the first coach to assign roommates by position in an effort to further integrate his Chargers teams.

Abner Haynes might be considered the AFL’s first great black player. The 1960 Rookie of the Year AND Most Valuable Player, Haynes was a shifty running back with speed, power and a desire to be great. He was also someone who was used to the pressures of being a black player in a predominantly white area, having integrated college football in Texas. The following piece talks about Haynes’ importance both on and off the field, and the legacy he leaves behind as an early AFL legend.