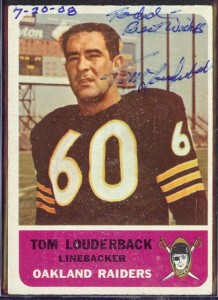 Tom Louderback was a linebacker, center and guard out of San Jose State.  He was drafted by the Washington Redskins in the 10th round of the 1955 NFL Draft, and played two seasons with the Philadelphia Eagles before signing with the Oakland Raiders in 1960.  He played two full seasons in Oakland, and then spent the beginning of the 1962 season with the Buffalo Bills.  He described his pro football career to me recently in the following email.

In 1955 I was drafted by the ‘Skins, played in the college all-star game, got hurt in preseason, was released, and jumped to Canada where I played for the Hamilton Tiger Cats.  The following year, I served in the USN – ’56 and ’57. I signed with the Eagles in ’58, and ’59.  In late ’59, George Blanda was telling me about a new football league was to form, call AFL, and Oakland, was one of the cities to have a team.  At this point of my life, married with our first child, I wanted to return to the West Coast, especially in the Bay Area were I was raised, and to be with my family.  I  requested to be released from the Eagles, and signed with the Raiders.  The Raider organization in 1960, had good intentions, however the administration was a shamble, nothing compared to the Eagles organization or the NFL.  I recall, at our first training camp held in Santa Cruz, CA, it was reported that over 300 players tried out for the team.  Can you imagine?

Yes, I did play in Hawaii when the Raiders played the Oilers.  My first impression, while boarding the airplane to Hawaii, was who were all of the non players and their families on the airplane? Later on I learned most of the people were stock holders of the Raiders, about 25 owning 5-10% of the Raider team. We had little scouting information on how to prepare for the game.  We were received well by the Hawaiian fans, who love FB.  In those days, it was one hell of a long way to travel for a pre season game.  After my second year with the Raiders, I was called by two of the team owners, (Wayne Valley & Chet Soda) requesting me to reduce my salary for the coming season. This was a shock, as I’d had a good year and was named the team MVP.  I refused to take a pay cut, and the hand writing was on the wall.  During early exhibition I was released, and immediately picked up by Buffalo.  Shortly into the season I had my right shoulder surgery, for a torn rotator cuff with several shattered bones, and thus ended my career. The hardest part of leaving the game was missing the relationships with teammates and friends.

One of the hardest collisions that I can recall was in Philadelphia, when we were playing the Pittsburgh Steelers.  While running down the field, I was blind sided by Ernie Stautner.  He whacked me into next week, and that was followed by a concussion.  The following week, watching the films, the hit it looked like a night mare.

I was pleased to be on a bubble gum card, and to this day, I receive a couple of letters each month, with a note and bubble cards to be autographed and returned.  It is nice to be remembered.

I hope this note fills in the Q&A for your blog. Wishing you well, Tom Louderback