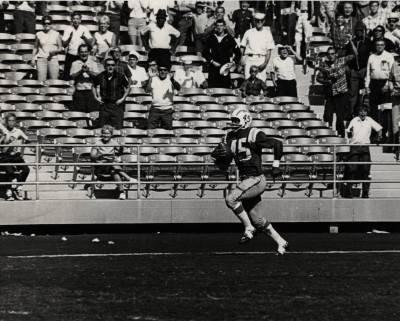 I had an opportunity this week to sit down with a legend of the San Diego Chargers and the American Football League.  In addition to having one of the truly great football names in the AFL, Leslie “Speedy” Duncan was a defensive back and potent special teams weapon for Sid Gillman’s San Diego Chargers.  Like a 1960s Devin Hester, Duncan made his name in professional football as a lethal punt and kick returner.

Speedy Duncan made his professional football debut in 1964, but a broken jaw limited his opportunities to play.  He became a regular in the Chargers secondary the following year, and immediately won the admiration of San Diego fans with two punt return touchdowns in his first full season.  A four-time AFL All-Star/NFL Pro Bowler with the San Diego Chargers and Washington Redskins, Duncan excelled in the defensive backfield as well.  He recorded 24 interceptions  during his career.  He returned three of them for touchdowns, including a 100-yard pick and return against the Kansas City Chiefs in 1967.

Today, Speedy Duncan is still fit and trim at nearly 73 years old.  He lacks his once-spry step, as he is building his body back up after suffering the effects of a staph infection last year.  But Duncan is doing well, and looks back fondly over his time in the American Football League.  We recorded the following 30-minute interview.  Enjoy!