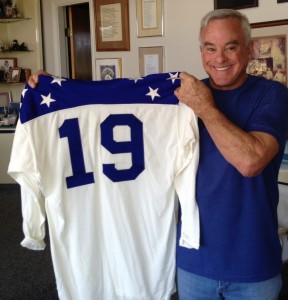 Lance Alworth holding his jersey from the 1965 AFL All-Star Game.

I answered the phone one day last week and heard a familiar voice on the other end.  “Hey Todd, it’s Lance.  I was wondering if you could come up and meet me?  I found some stuff at the house that I would like you to see.”

It didn’t take me long to answer that question, and a few days later I found myself (and my three kids) sitting in Lance Alworth’s office.  Lance is a wonderful host, and once he told my kids where he kept the candy and to help themselves, we walked into the next room to look at his findings.  He had a few boxes piled up, and from a distance I could see a couple of jerseys.

The boxes had a handful of neat items; A program from the 1962 College All-Star Game, an advertisement for the 1962 Look All-America Team, a handful of books, photos, golf shirts and other bits and pieces pertaining to his football career wither at the University of Arkansas or with the Chargers.  The real jewel of Lance’s most recent findings, however, was his game worn jersey from the AFL All-Star Game played in Houston, Texas, on January 16, 1965.

I have a fascination with this particular game because of the boycott made by the players in the face of racial bigotry that they faced in New Orleans, so to have in my hands a piece of equipment worn in that game was more than a bit thrilling.

The jersey itself remains in fantastic condition.  It has a very simple design, and in fact, looks identical from the front and back.  The only noticeable difference being the small, Spanjian label on the front.  Four small, white stars are set in a diamond pattern over a blue patch on each shoulder.  Alworth’s blue #19 accounts for the only other markings.

I took the jersey home with me that day, where I photographed it to add to a digital archive of Lance’s memorabilia.  From there it will be packed into acid-free tissue and box, and moved to the storage area set aside for Alworth’s fantastic accumulation of AFL treasures. 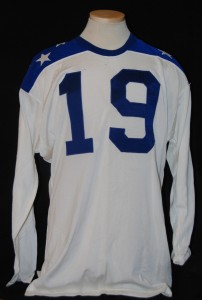 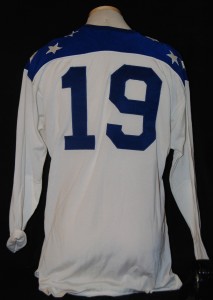 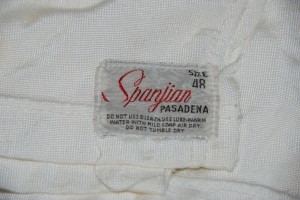