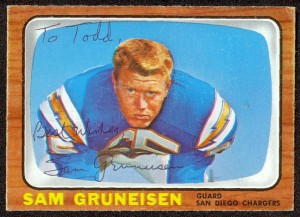 Longtime San Diego Chargers offensive lineman, Sam Gruneisen, passed away on Friday, September 28th.  He died due to complications from a fall that he took a month earlier.  He was 71 years old.

Sam Gruneisen came to the San Diego Chargers out of Villanova, part of the great 1962 draft class that also brought John Hadl and Lance Alworth.  Gruneisen entered professional football as an offensive guard, but was moved to center in 1965, after the release of Don Rogers.  A highly cerebral player,  Gruneisen remained with the Chargers through the 1972 season.  He spent one final season with the Houston Oilers before retiring as a player.

The Gruneisen family lived in eastern El Cajon, where his children graduated from Granite Hills High School.  Once his playing days were over, Gruneisen embarked upon a coaching career in which he touched players of all levels, in places all around the country.  Stops along his coaching tour included the University of California, Oakland Raiders, San Jose State University, Los Angeles Express of the USFL, and many more.

In later years, Sam and his wife, Barbara lived in Orlando, Florida, where they were near their children.  Family was always important to Gruneisen, and kept him going while he struggled with lymphedema, likely a consequence of his multiple knee surgeries.  A memorial service will be held for Sam Gruneisen in November, in his hometown of Louisville, Kentucky.